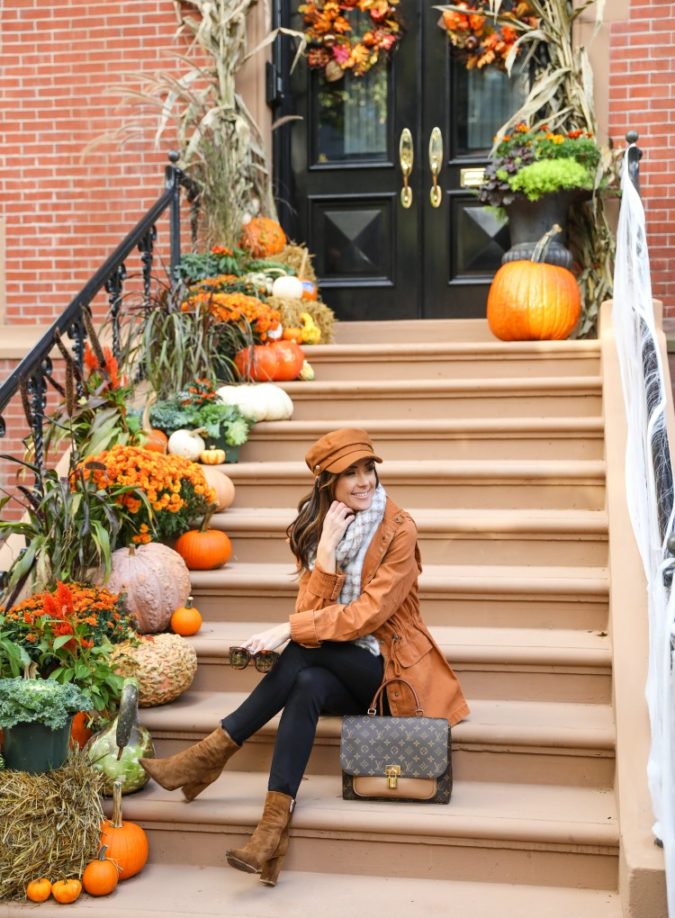 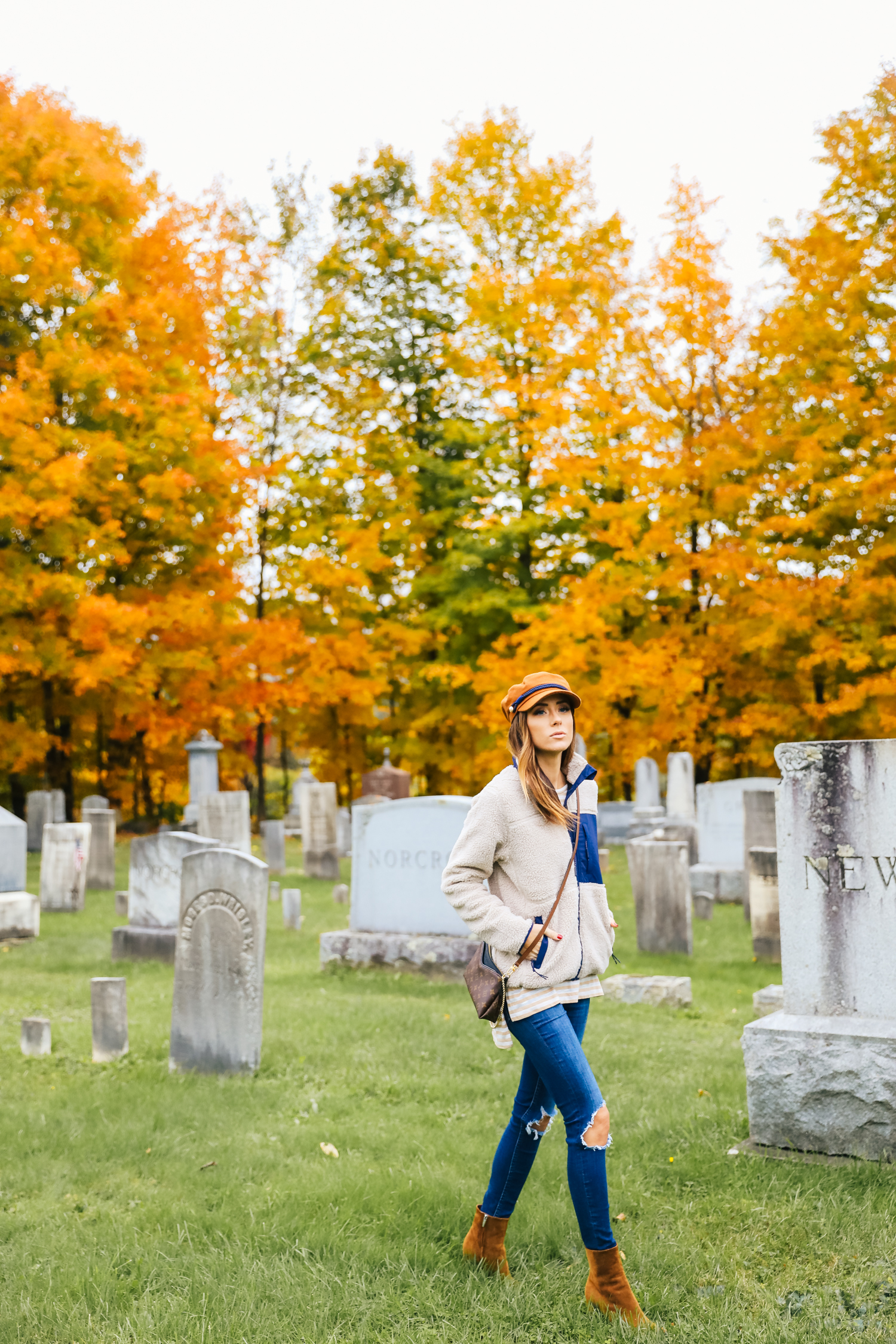 One of my most requested blog posts over the last few months has been a round-up of my latest favorite creepy true-crime podcasts, Netflix series and documentaries. So, today, I’m excited to finally share ONLY the best with you. I’m breaking down the TEN creepiest true crime [with the exception of one!] podcasts, Netflix series’ and documentaries that I have watched / listened to since getting into them last year.

While it may seem a little weird to be into these tragic, horrible and creepy stories, I think they ultimately remind me about how precious life is. More on that in this Instagram post. It’s also why I felt led to take these photos in a cemetery. I wasn’t trying to be disrespectful or make light of the dead here. I find cemeteries to be beautiful and reminders that the past deserves to be honored and remembered. They are visible reminders of what was, otherwise peoples’ stories would be forgotten. 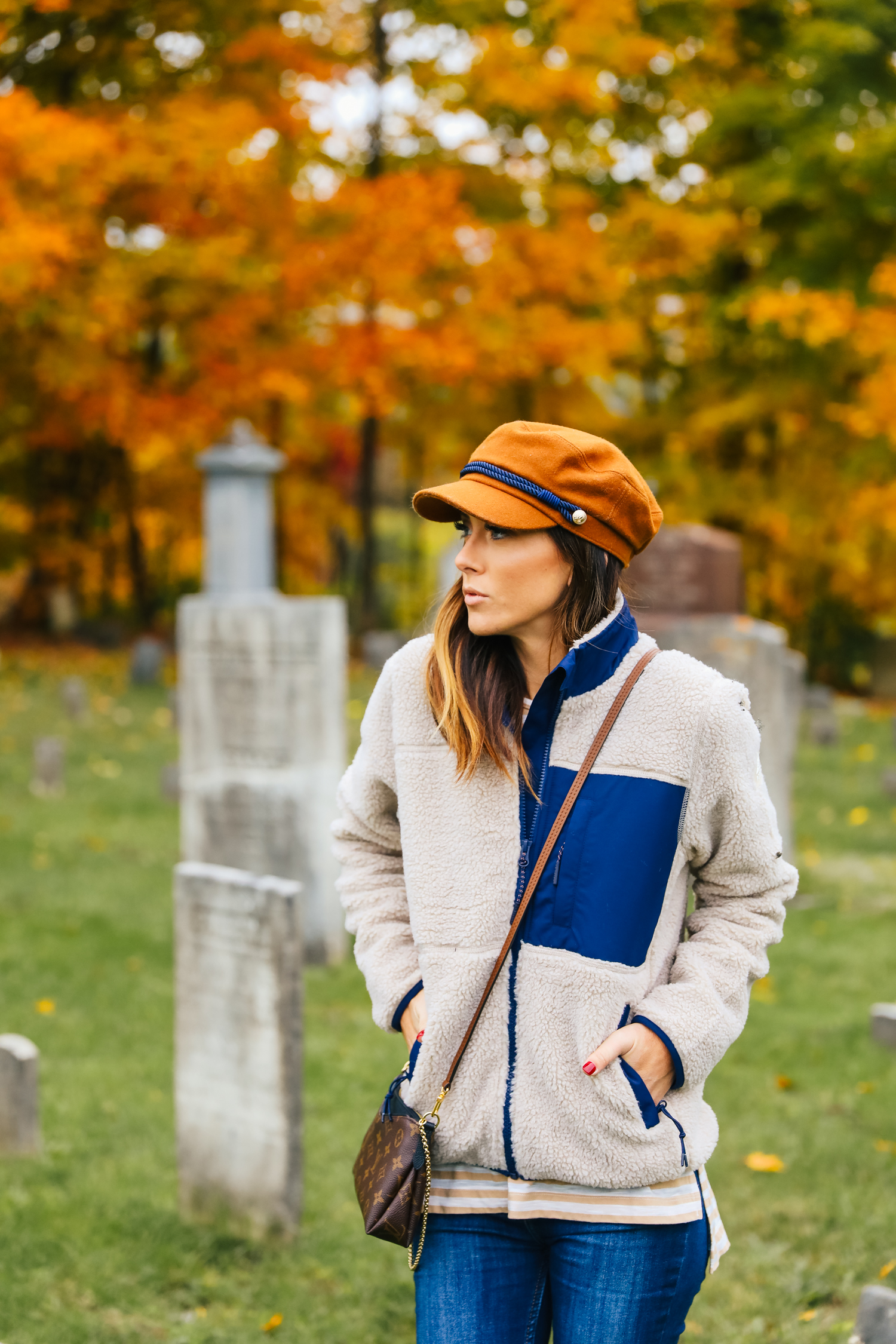 This is probably the leading investigative true crime podcast out there right now! Payne Lindsey and the team at Tenderfoot TV have curated one full season of Up & Vanished, which delved the Tara Grinstead case, which was one of the top 5 cold cases in the state of Georgia up until the podcast led to TWO arrests in the case. The list of episodes looks intimidating at first but, I promise, it’s very well done, and you’ll fly through them and wish there were more at the end! This podcast truly proves the power of social media. It can be used for good. While it’s sad what happened to Tara, what comes out of this is closure for her friends and family.

The second season is underway now and they’re investigating an all new cold case about a girl named Kristal, who up & vanished in the small town of Crestone. I wish the episodes were as long as the ones in the first season but, it is proving to be an interesting story and I always look forward to the new episodes on Monday’s.

This is another investigative podcast that was heartbreaking but kept my attention. It’s about the notorious case of Jacob Wetterling, a child who was abducted back in 1989. This case was admittedly mishandled by law enforcement, fueled national anxiety over stranger danger and led to the development of sex offender registries in the United States. Listen to Season one to hear about the case and see if Jacob’s parents and family have received any closure over who abducted their son.

This is a true-crime podcast that has been all the rage over the last year. It is the first to come out of the L.A. Times. It explores the relationship between Debra Newell, a successful interior designer, and John Meehan, a good looking nurse anesthetist who just got back from deployment in Iraq. However, Debra’s family felt like their relationship had maybe escalated too quickly and eventually we exposed to the ‘real’ John, the John that has this terrifying control over Debra. We start to fear John and wonder what he can do and then he shows us through the account of one of his victims. Let’s just say this podcast is a true life account of abuse, deception, denial and survival. There was a Dateline episode that talks about the case if you get done listening to it and want to hear more! Also, Bravo is releasing a limited television series inspired by the story. It airs on November 25th!

Okay, so this is the only one I included in the list that ISN’T true crime. I’m not typically super into fictional crime stories but I was HOOKED by the end of the first episode of Season 1. I loved that it kept me intrigued to know what happened next and the second season is no different. Both seasons are completely different stories but it’s the same detective trying to uncover the truth behind the deaths that occur in the first episode.

The first season stars Jessica Biel, who plays a mother who inexplicably stabs a stranger to death, and Bill Pullman, the detective, struggles to unlock the mystery buried in her missing memories. The first season had some scenes of a sexual nature that were extremely difficult for me to watch so beware and, when you come to that point in the story, you’ll understand what I’m talking about.

Thankfully, season two had none of that but the story was just as bizarre and difficult to piece together. It centers around an 11-year-old boy who kills his parents with no apparent motive. Soon, though, you realize there’s nothing normal about this boy and where he comes from. This story will confuse you, surprise you and, if you’re like me, will leave you with quite a few questions. I didn’t hate this season. It kept me intrigued and interested but I felt they cut it short by a few episodes. There were things left unexplained, which annoyed me.

But … excited for Season 3!

So, this is scripted series that examines the federal seige of David Koresh’s Branch Davidian compound in Waco, Texas back in 1993. While it isn’t the typical true crime documentary that I prefer, I did find it to be interesting as I didn’t know anything about this tragic story prior to watching it. There was so much about Koresh and his teachings that I didn’t agree with as well as his way of life, but I do think it shed some light on the media and how federal negotiations work that I found to be enlightening, if it’s true. It hurt my heart a bit to see that there was also a strong possibility that some of the women / young girls were not keen on having a sexual relationship with Koresh so, that was unsettling, and the end is really, really sad. This is definitely a bit of a different ‘creepy’ suggestion but creepy in some ways, nonetheless.

This docuseries examines the decades-old murder of Sister Catherine Cesnik and its suspected link to a priest accused of abuse. It was quite disturbing and left me pretty angry at the end.

This four-part true crime Netflix documentary begins with the gruesome and public death of a pizza man who attempted to rob a bank with a bomb around his neck. What unfolds from there is more bizarre than anyone could have guessed and one woman, Marjorie Diehl-Armstrong, is at the center of it all. The documentary, in my opinion, is not as good as the recent Dateline episode that covered this story so, if you find yourself wanting ‘more’ about this story – check out Season 27 Episode 4 of Dateline. You should be able to watch it On Demand. It aired this past Friday evening.

If you love a story that leaves you wondering whether it was an accident or murder, you will be sucked into this one! After Michael Peterson’s wife is mysteriously found dead at the bottom of the stairs, his life is put under the microscope to figure out whether he is to blame or if there could be any other explanation. There are also some podcasts that look into this case but I like the Netflix series the most. If you’ve seen it, what do you think? Did he do it?

This two-time Emmy winning HBO series is a six-part examination of Robert Durst, the scion of a New York real estate empire, who has been long since suspected of three different disappearances and killings, one being the killing and dismemberment of his neighbor in Galveston, Texas. This man is sick and twisted and, up until recently, was not in jail. He has maintained his innocence the entire time. The very end will have you completely shocked.

NOTE: DO NOT LOOK HIM UP ON GOOGLE BEFORE YOU WATCH. It will spoil it.

Okay, I saved the CREEPIEST for last. My friend, Lauren, sent me these documentaries about the Golden State Killer back in May and told me to buckle up. There’s one on CNN / HLN and then there’s one on Investigation Discovery. Y’all … I can watch a lot of creepy stuff and not get actually creeped out. But … the story of what this guy did to women – and later men – between 1974 to 1986 throughout the state of California is truly disturbing. To think that this happened when families didn’t have the luxury of modern day security systems gave me goosebumps and instilled a deep sense of gratitude for the things we’re able to opt into in our day and age.

The creepiest thing is that law enforcement never caught this guy …. until this year. They were able to link him to the murders because a relative of his sent in their DNA through one of those family ancestry sites. The DNA submission was extremely similar to DNA found at one of the crime scenes and they were able to apprehend the Golden State Killer. There have actually been a lot of cold case breakthroughs thanks to this new DNA technology. It has also proven the innocence of people who have been serving life sentences for crimes they didn’t commit. Obviously, this is controversial and it’s possible this will be something that we will have to vote on in the future but, for now, if you submit your DNA to sites like that, law enforcement can use it to find links to criminals.

There’s an HBO docuseries in the works that is based on Michelle McNamara’s book “I’ll Be Gone In The Dark: One Woman’s Obsessive Search for the Golden State Killer”. McNamara, a freelance writer and crime blogger, was the woman obsessed with this case and trying to figure out the identity of the killer. Sadly, she passed away in 2016 while writing the book and her husband, comedian and actor Patton Oswalt, finished it for her along with some of her colleagues close to the case. I’m really excited to hear more about when it will launch and will keep y’all updated when I know more!

After watching the documentaries, if you want to hear more, you should listen to this podcast where the ladies from My Favorite Murder interview Paul Holes. It’s everything!

And, that does it! While it may seem a little weird to love true crime, I think these stories can really help us better understand certain aspects of life that we wouldn’t otherwise understand if we didn’t have this curiosity. If you’re looking to get creeped out in time for Halloween, any of these will certainly do that!

Leave a comment below if you’ve seen any of these and let me know if I missed one of the ones that creeped you out! Also, all outfit details are mentioned below! xo.

• My distressed jeans are one of my favorite pairs under $100! I featured them in this post from last week where I styled them in two different outfits!

• My hat comes with an interchangable rope band, one matches the hat color, cognac, and the other is navy blue, seen in the post.

• My suede booties are pretty pricey but I’ve been wearing them a lot to justify spending that much on them. I found this pair that is the most similar option to mine, although the color isn’t quite the same. If you’re looking for a pair of quality booties that are the same color, I’d recommend these!