What I’m Loving Lately and Some Big News 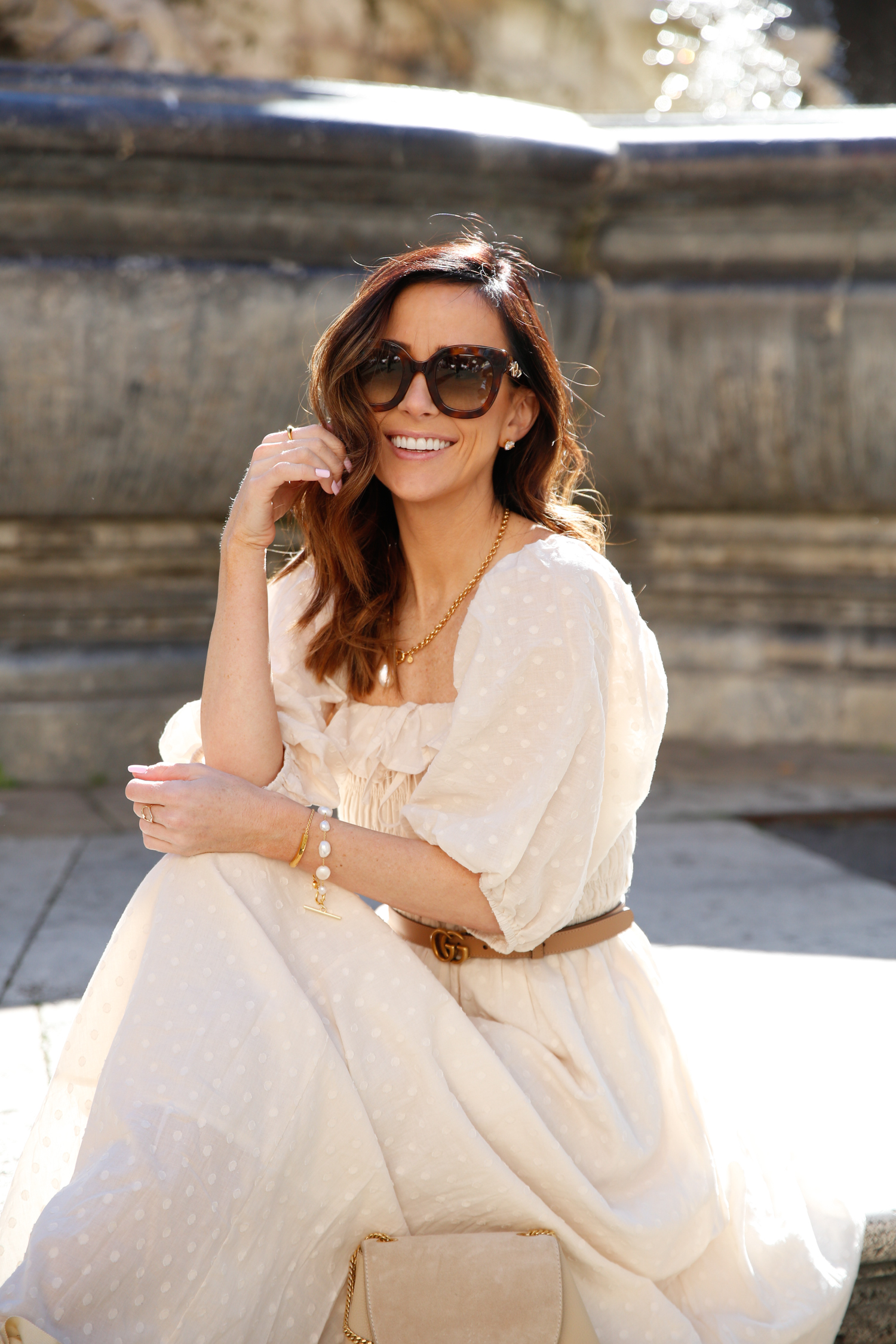 I’ve been sharing myself online since 2011. Back then, it was really scary to share my love for getting dressed and the frivolous things that bring me joy with strangers for everyone I had ever known to see first. The influencer industry did not exist back then. There were a few bloggers but it was mostly a few gals, like myself, who just used Instagram to share their daily outfits and their most recent arm party. What it has turned into has been the most pleasant surprise. I never expected that it would lead to me being able to work for myself, travel the world, and ultimately follow this crazy dream of mine to live abroad just outside of London, my favorite place in the whole world. It’s been a whirlwind to say the least but an incredible one at that.

Life is interesting, though. Sometimes, you set out to achieve a dream … and through all of the hard work and the challenges to get there, you persevere and you make it happen! You do actually achieve it but then, much to your surprise, the reality of that dream is absolutely nothing like the idea you [inadvertently] dreamt up in your mind.

That has been what living in the UK has been like since 2020.

I don’t know how else to explain this but, energetically, I have felt so different since arriving. And not that I’m not myself here … Well, I do believe I show up differently but I have found a really interesting [potential] explanation for that — but that’ll be for another time … I just feel as though, through external circumstances, I have found difficulty in navigating the changes of day to day life and, thus, finding myself at home here. Additionally, I feel like things are shifting. I have found it difficult to maintain my personal level of interest and involvement in what I’ve built here on this platform [almost exactly ten years ago]. I really hate to say that but it’s true. Things have slowed down and I’m sad about that but I also find myself not really wanting my livelihood to be dependent on me showing up on Instagram and, candidly, promoting consumerism to the degree that I would need to in order to make up for the losses of partnerships. Ha, getting really candid here …

Anyway, it’s just really shaken & disoriented me. This all started as a passion project. It’s always been so fun and something that I dearly love. So, this realization has caused me to grieve quite a bit. It’s caused me to grieve the fact that the foundation of this beautiful thing I’ve built is starting to shift. Shifts in the foundation don’t always make things crumble but it makes it so that it can’t stand as structurally sound as it once did and that’s been hard to come to realize.

I’ve also been going through lots of internal shifts myself – personally & spiritually – and I think there’s a part of me that knows I’m changing. And, with those changes, there comes the possibility / probability of this space needing to change, as well. Maybe not completely [at this point in time, I can never see myself leaving this behind completely] but to some degree to where it feels more aligned with me energetically.

In the midst of this confusing season, I have felt a huge need to understand where this energy I’ve been feeling is coming from. Like, what is causing this? I have to make sense of it. None of it happened overnight but, it’s almost as if I’ve been given crumbs to follow and, eventually, I found astrology to be the most logical explanation.

Ha, I held my breath as I typed that.

It feels uncomfortable sharing that openly being that it’s not a widely understood or embraced system. It’s the same feeling I had when I first started sharing my outfits on social media.

“What are people going to think?”

“Why can I ‘feel led’ to do things that everyone thinks is cool or is widely accepted?”

“Why do I always have to do something that feels exciting and interesting to me but weird to everyone else?”

Of course, what I do for a living now is seen as ‘acceptable’ and has proven to be a legitimate and successful career path [maybe not be everyone but many], so I can’t deny that there’s a part of me that is frustrated with this new passion. It’s easier to do the thing that is going to make me look ‘cool’ or at least the acceptable in most peoples’ minds. But … is that my ego leading me or is that my soul?

Side Note: I also want to acknowledge that maybe you don’t see it as weird at all so maybe this is just me getting in my own way. Who knows. I’m not afraid to admit that I still have some healing to do around my self-esteem and needing to release this idea that I ‘need’ to be liked. Again, wow. Getting really candid … back to what I was saying …

I think our souls lead us down scary paths on purpose. We’re meant to grow. We’re meant to evolve. And we can’t do that unless we’re up against something. So, even though this feels scary, I’m not going to deny myself and my soul the opportunity to grow and also, potentially, help others.

While it might be deemed unconventional, the astrological readings I’ve had haven’t been ‘dark’ or rooted in any sort of ‘evil’. I’ve personally never subscribed to that idea, even when I was going to church every Sunday. But, I think, growing up, I did pick up the idea that liking astrology too much was ‘bad’. But, for me, in my experience, it’s actually given me a lot of peace, understanding and hope … and nothing about it is dark.

I am going back to school to learn astrology on a deeper level.

I start the week of the 23rd and I cannot wait! I’ve already taught myself quite a bit but I’m terrible at creating structure for myself so, I felt like this was going to be what makes the most sense for me to learn it. What comes after I learn it? Who knows! For now, I have the desire to learn it and potentially offer services in the future but, I think the program will really tell me if this is an interest that I want to learn just for myself or if I want to do something more with it. So, we shall see!

This season has truly taught me so much. In March, I’ll celebrate [yes, celebrate … despite what I just shared ha … I am really proud of myself for persevering] the three year anniversary of my move and I’m happy to say that I’m finally starting to feel this sense of hope about my future here … despite all of the confusion, sadness and frustration I’ve experienced. The puzzle pieces are finally starting to fit together and I believe I have the space this season has created for me to thank for that. It’s never in the busiest seasons of life that you get your best ideas or your most transformational insights … it’s in those slower moments, those quieter, and sometimes, sadder seasons.

As difficult as the past three years have been, I’m finally settling into the understanding that this has all been for my greater good. While I don’t know what the future holds, I am confident that it’s in these seasons when you shed the layers of yourself that no longer serve you. They challenge you to level up and / or bring you closer to your purpose in this life. I think we all know when we’re outgrowing a season of life we were once in and I think this is just that.

Thank you for taking the time to spend part of your weekend with me and allowing me to share myself with you. I don’t really know how much my interest in astrology is going to be a part of this platform. I realize it might not be for everyone so I’ve thought about maybe opening a new account so that those who are interested can follow along there. What do you think? Leave me a comment below. I’ll be responding to them throughout the day!

To end, I just want to say that … I hope that, if you’re in a similar season where things just feel really confusing, you never deny those small whispers you hear and wonder where they are coming from. I hope you never doubt the synchronicities that present themselves day to day or week to week. That’s how you’re being led. From God. From the Universe. Whatever it is that feels right for you to call it. [And, side note: this isn’t the place to debate over what is ‘right’. That’s an individual choice. I want to make that clear. I respect where everyone who is reading this is coming from. It’s not wrong for you to have your own beliefs but I do feel we need to respect that we all might not agree with what is ‘right’ and a level of respect needs to be maintained here.] We are absolutely being led, by our souls, and by something greater. It’ll likely feel scary to do what we are meant to do in this life. It’s a pre-requisite for growth and transformation in the absolute best way. So, don’t settle for easy lives. We’re meant to be challenged. Diamonds are made under pressure.

Love y’all! Let’s have a chat in the comments … see you there! xo.