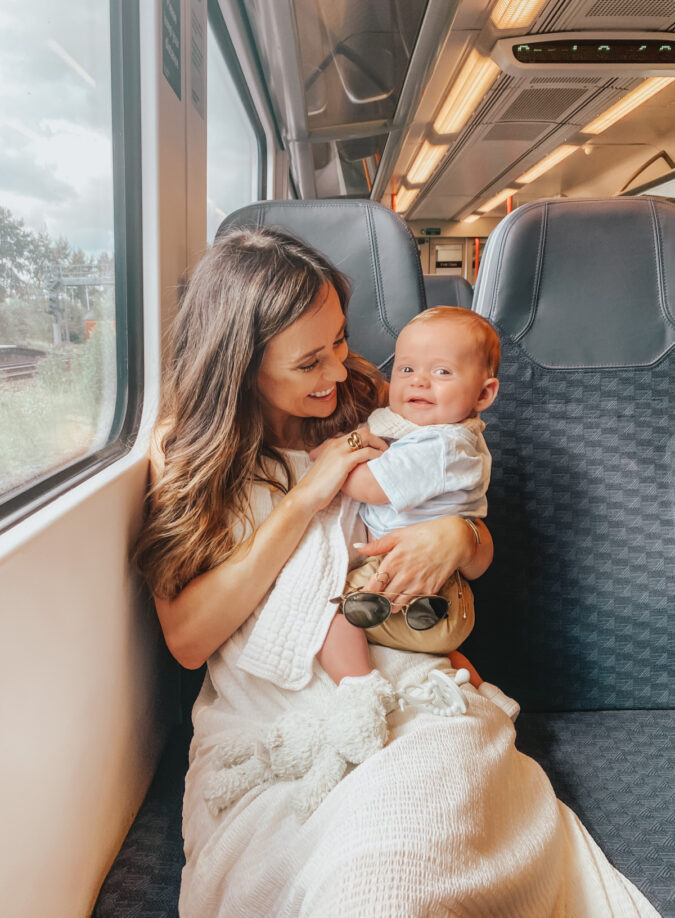 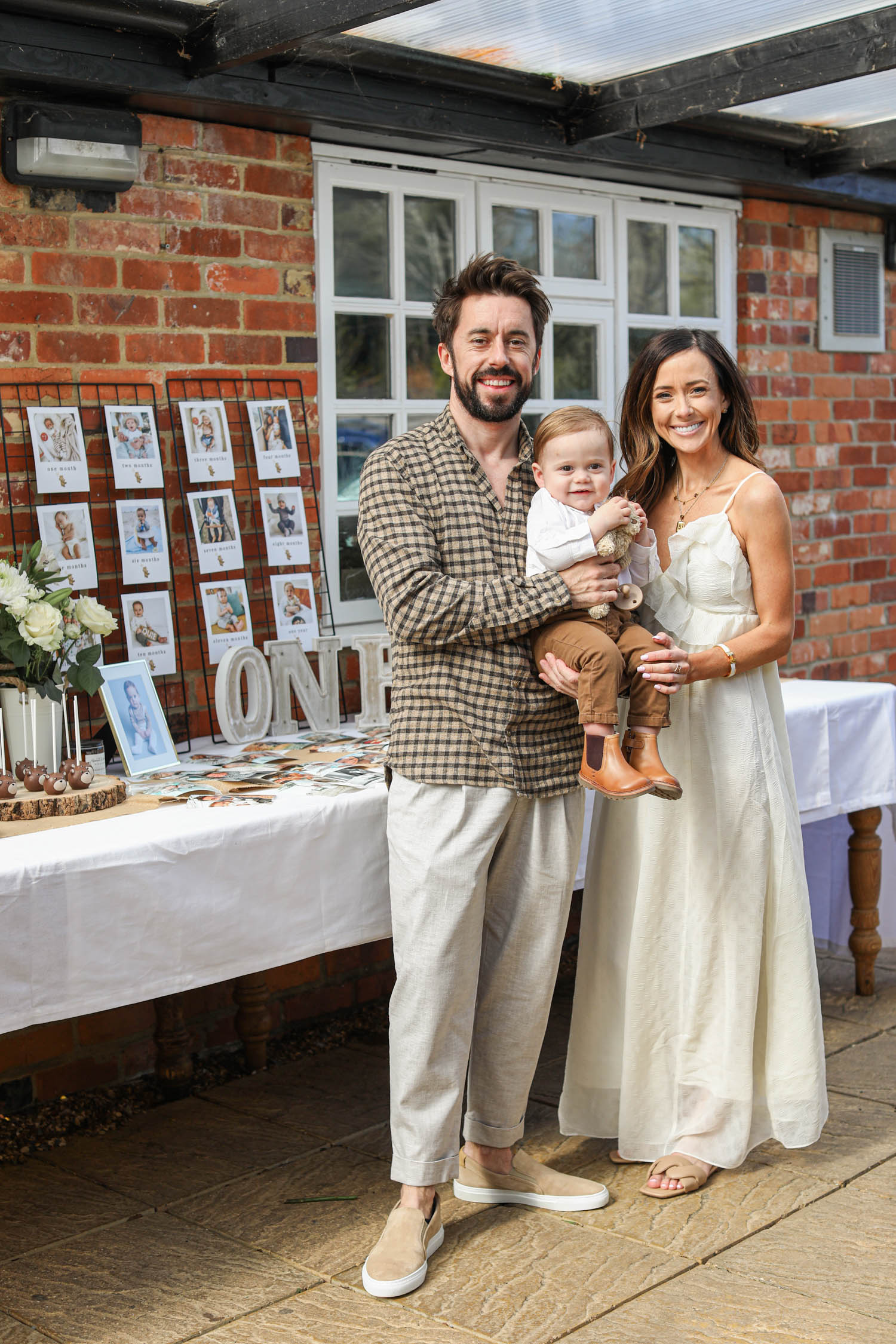 When it comes to raising children, people say ‘the days are long but the years are short’ and I never really got it until recently. Louie celebrated his FIRST birthday on the 22nd of March and, as I was reflecting back on this past year, I could only think of one word: WOW. In some ways, I feel like I’ve lived five lives while simultaneously feeling like ‘how was that a year ago?’. It’s been both challenging and rewarding, exhausting and life-giving, etc etc but I wouldn’t change any of it. Hmm .. wellll, maybe I’d change how many times we’ve moved ha! But, when it comes to Louie, I wouldn’t change a thing. It’s been an incredible privilege to be his Mummy and I’ve loved watching him grow little by little. 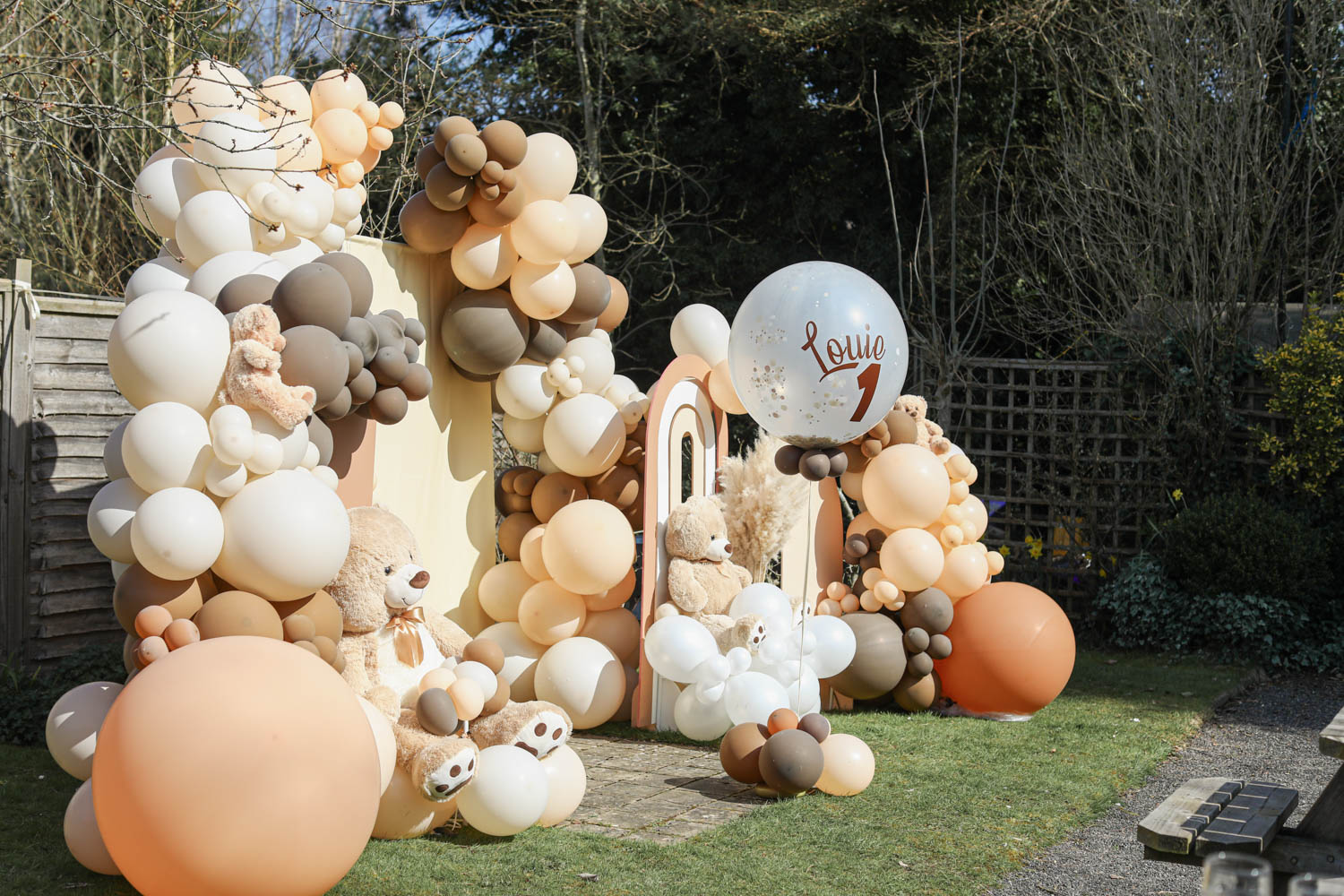 I went back and forth on whether to put a birthday party together for him. Sometimes, I see these incredible over-the-top birthday parties for one-year-old’s and I just do not understand the point of spending so much time and money when they’re this little. In my mind, there’s only so much they can truly participate in and they won’t remember any of it anyway! But then, the other side of me is like ‘oh my gosh, that looks so fun!’ and we kept this little angel alive for a year! He survived and so did we! That deserves a celebration! Not to mention, almost my entire pregnancy with Louie was plagued with either lockdown’s or group gathering restrictions so, despite my first thoughts on the idea, we decided it would be worth it to put a little party together — for him and for us! 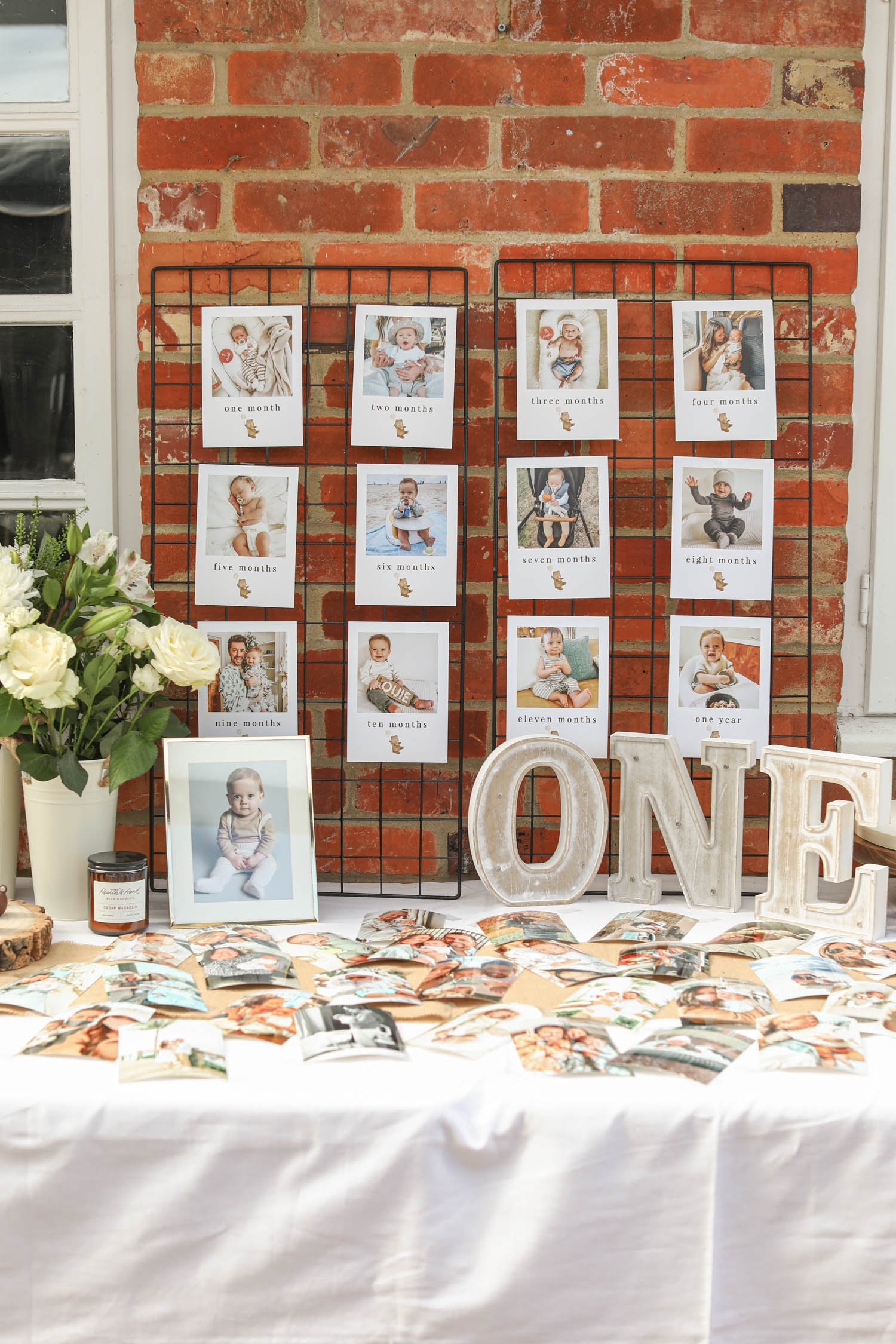 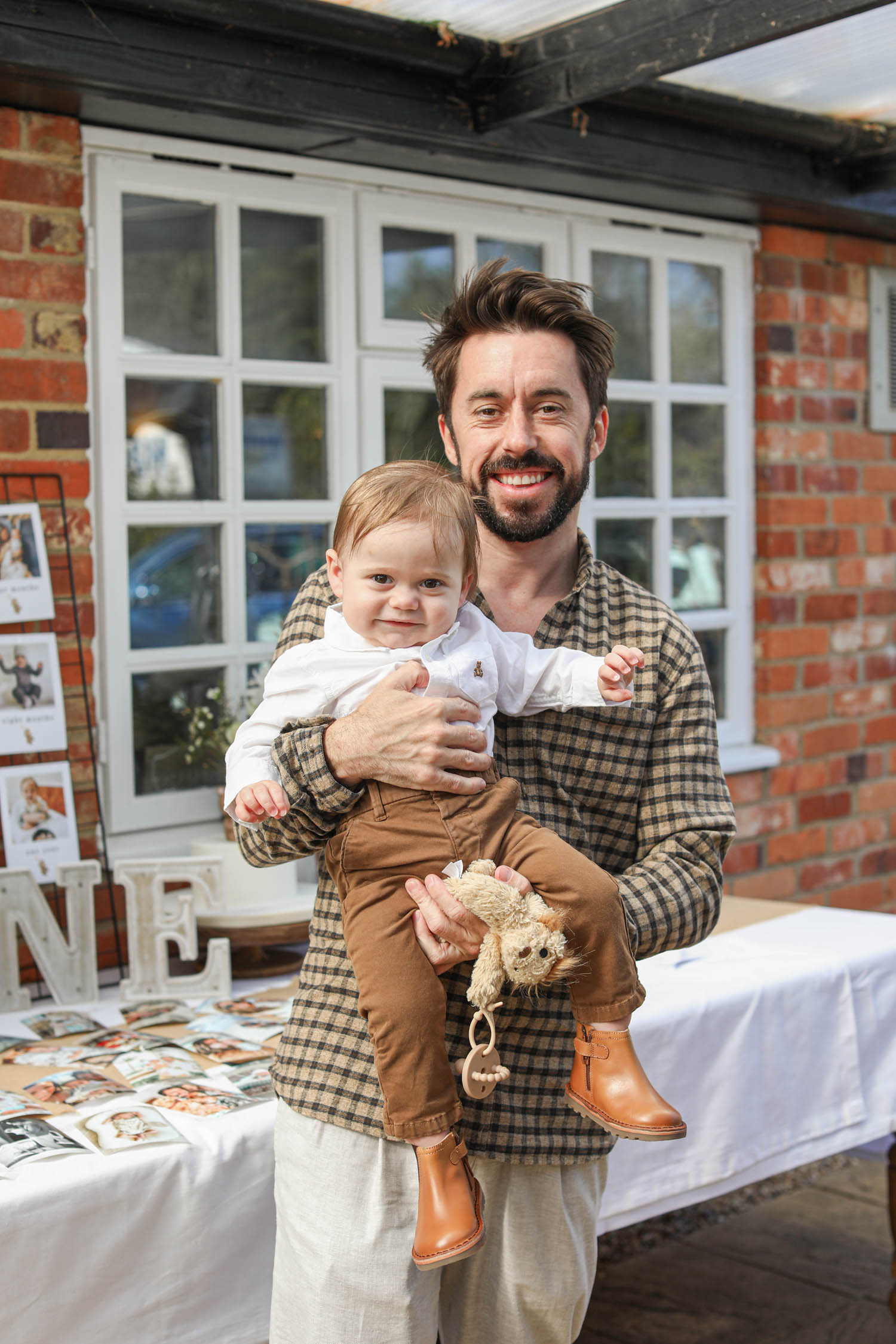 First, we needed to decide where it was going to be. We felt like it’d be way too much stress to have it at our house so we nixed that idea right off the bat. One of John’s best friends’, Charlie, owns a pub near where we used to live, just outside of Farnham, called The Hampshire Arms. It’s definitely worth a visit. The service is great and the food is exceptional. The pub is set up perfectly for group events. There’s a large indoor room with space for quite a few tables that seat six people with easy access to a bathroom. Then, there’s a door off of that room that leads out to the garden with tons of seating options and lots of space to work with. So, when Charlie heard we were wanting to put a party together for Louie … he was quick to offer to host it at the pub and we are so happy he did because it was perfect! 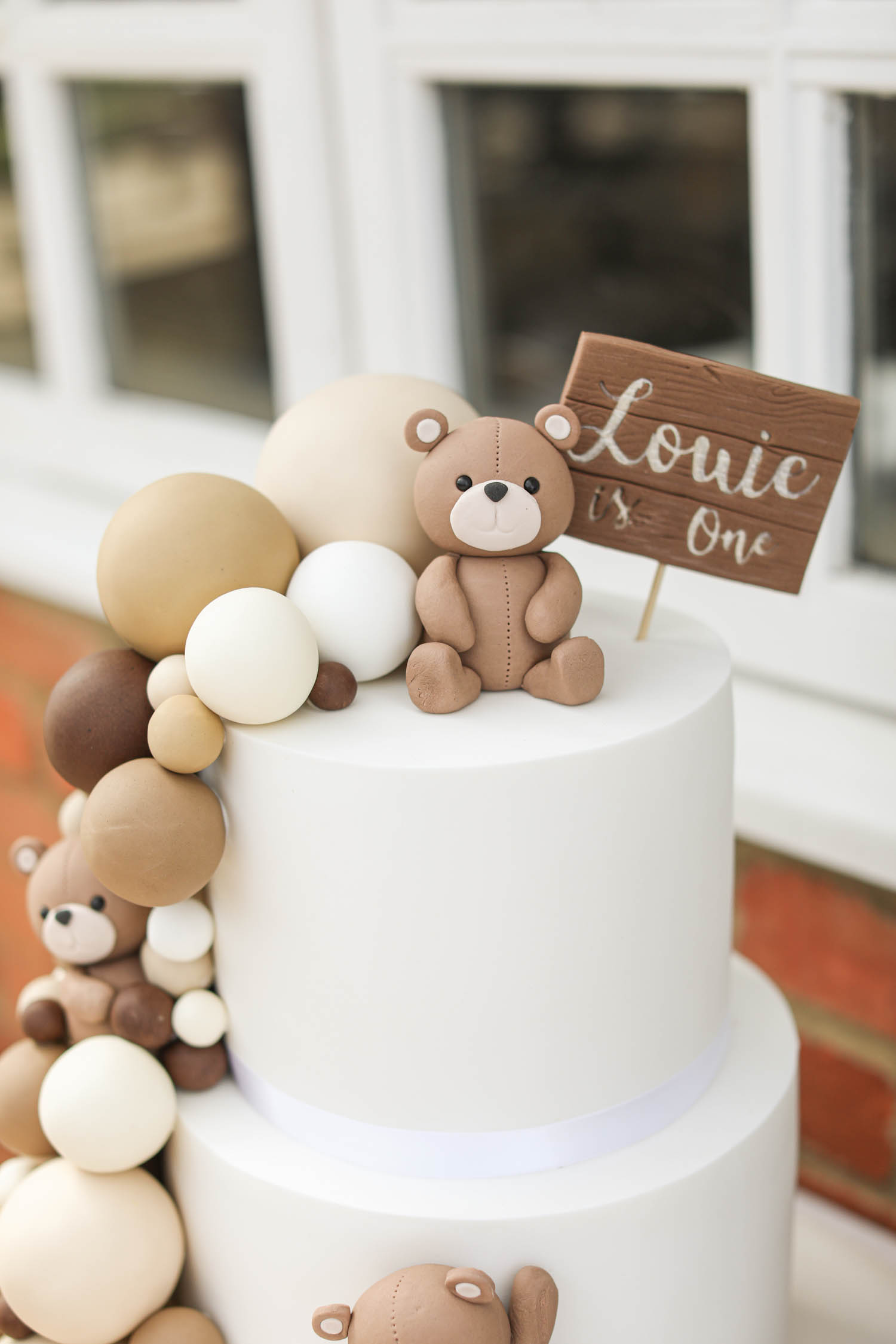 After we chose a location, we discussed the time everything would begin. We couldn’t arrange for anything with vendors until we knew what time set-up needed to happen. One thing I didn’t do was base it around Louie’s nap schedule which, most parents might think is crazy but, hear me out. Louie takes two naps a day. The first is from 9-11, although he definitely doesn’t consistently slow the whole two hours. His second nap is sometime between 1-3 and, again, he doesn’t sleep that whole time. But, we ended up having the party start a 1:00 because, I felt like, even if he isn’t awake when everyone arrives, at least he’ll be wide awake around the time that we might want to do the cake cutting and singing happy birthday. He ended up sleeping en route to the party and then, after arriving, he woke up and stayed awake the whole afternoon which, resulted in an early bedtime and it worked out completely fine. Additionally, having a 1:00pm start time also meant that myself [who went to the venue early to set up] and the vendors didn’t have obscenely early starts.

**HEADS UP: I realize that some of these details are so superfluous and not everyone will care about this but I get asked some pretty detailed questions about Louie and motherhood and things so I’m just being detailed because I wouldn’t be surprised if someone asked me how I decided what time for the party to start, hah** 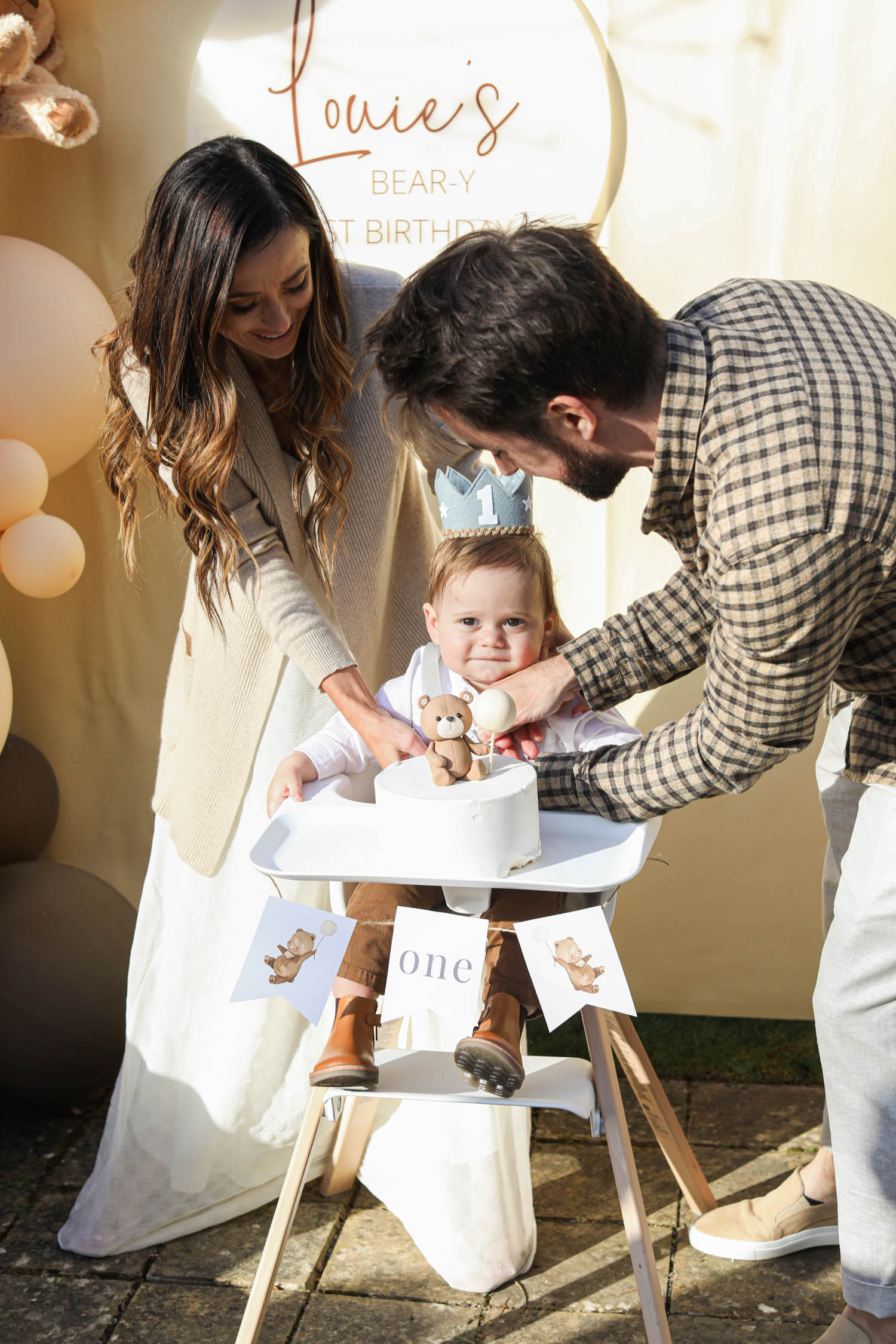 For the theme, we both thought a bear theme would be incredibly fitting because Louie, since he was about two months old, has been comforted by this little lovey, which is attached his dummy / pacifier, called Baby Bear. And, since he was born, have affectionately called him our Baby Bear.

I wanted to make everything as easy as possible. I’m not a big DIY-er so, for me, this downloadable and customizable pack of graphics that corresponded with the theme was the absolute BEST find. I think it’s designed so well and I loved that I didn’t have to wait for anything to arrive in the mail. It was incredibly easy to customize. All you have to do is save all of your files to a folder and send it to a print shop to print. There’s a print shop just a short walk from our house that only needed 2 days notice to have everything printed so, it worked incredible well for us. It included a mobile invitation that we texted out to our people although it does include a printable invitation if you prefer. It also includes a 12-month banner photo banner or a board [love that she gives options!], a welcome sign, a time capsule activity for guests, tags for party favor bags, along with a few other things! We used almost everything! 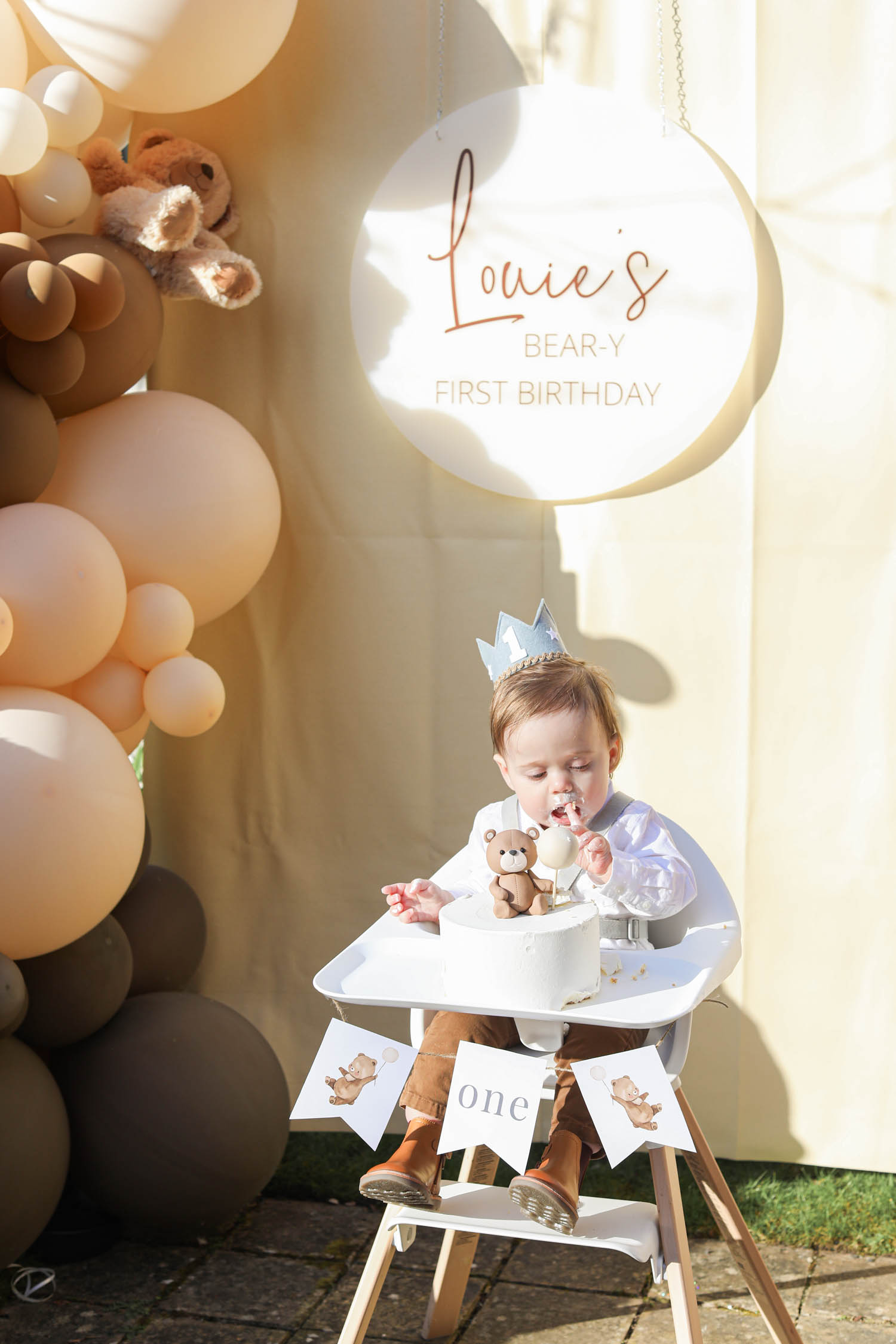 If you’re looking to do a bear theme for your child’s party, I put together this graphic for you with a few easy sources. 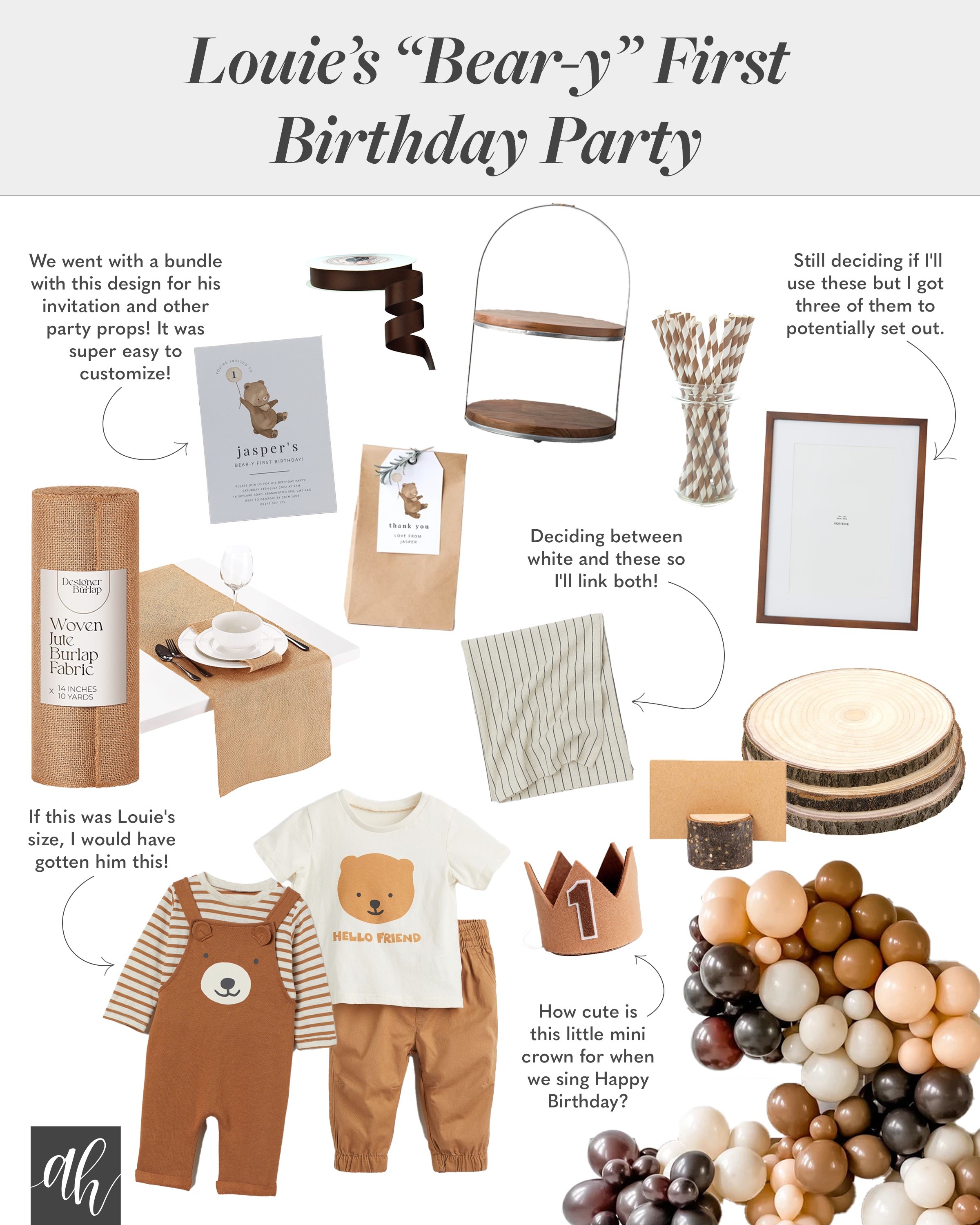 Overall, Louie’s party was very simple. We had a couple of long tables put together that had the big cake by Cakes by Robin [who I can’t recommend enough!], some desserts and treats for guests, as well as the time capsule activity, and some photos recapping the year. If I had done a baby book for him, that probably would have sat in the middle instead of all the photos but, you know, we’ve had a busy year with moving so your girl just didn’t get around to doing any of that, ha! Maybe one day? Or maybe never, hah. Anyway, we did have a little area set up with balloons and a backdrop for photos and a place to do his smash cake, which was fun but, also, completely not necessary. We used Confetti Party, which is based in Guildford. We were happy overall with everything but, I will say, they weren’t as easy to work with as other vendors. 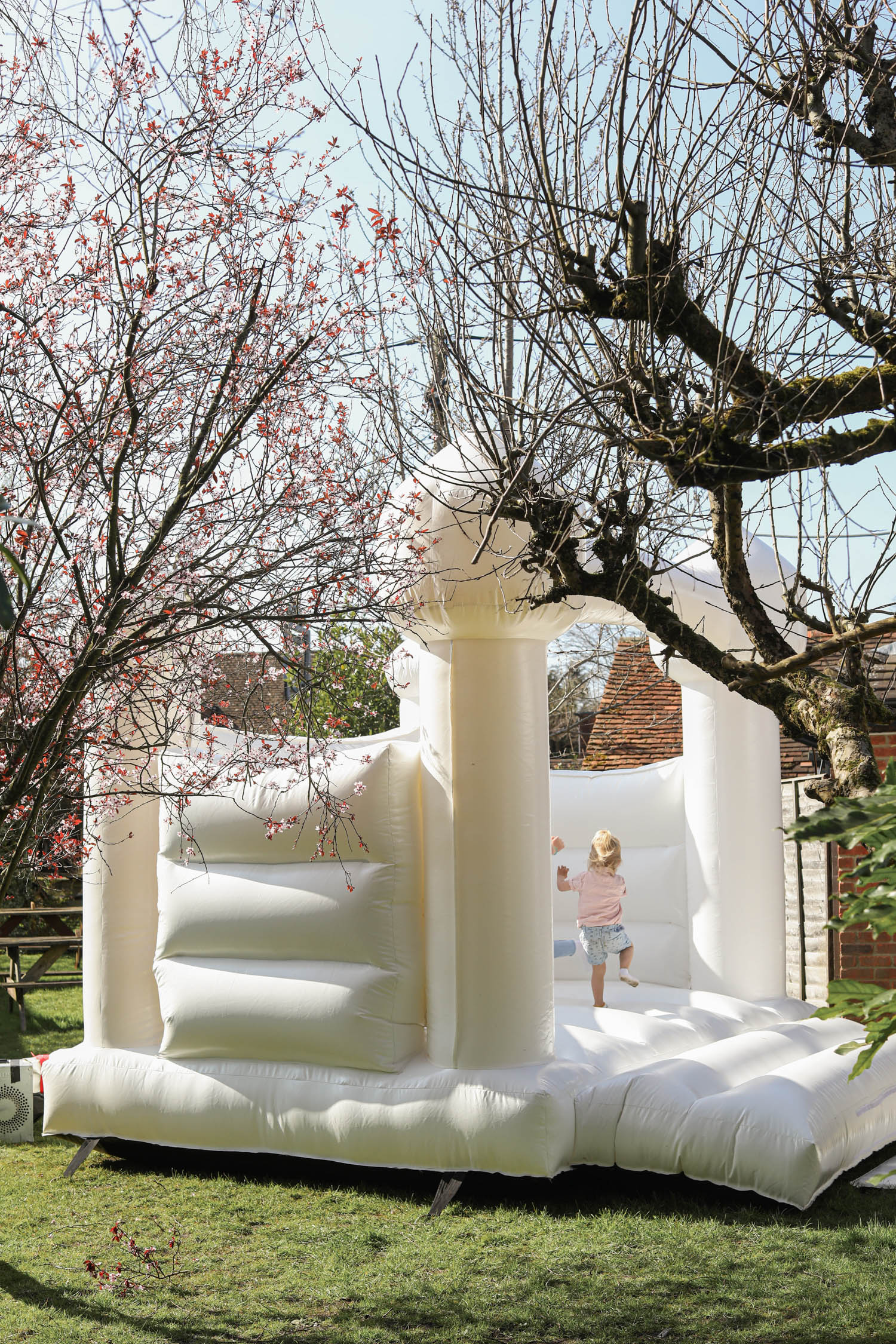 But, one thing for us that was absolutely worth having was … the bouncy castle! A lot of John’s friends have older children and we wanted to make sure they weren’t just sitting around at a one-year-old’s party they had never met, ha! Y’all … even the older kids, that are almost in their teens, were so into it! They didn’t get off of it for what seems like the whole party! It was awesome and made me feel so good as a host because I knew the parents could relax and enjoy their time, as well, versus thinking about how to keep their kids entertain while they try and catch up with their friends. So, it came in so clutch! If you’re in the Hampshire / Surrey area, we used We Love Occasions. They were excellent. Extremely easy to work with and efficient. 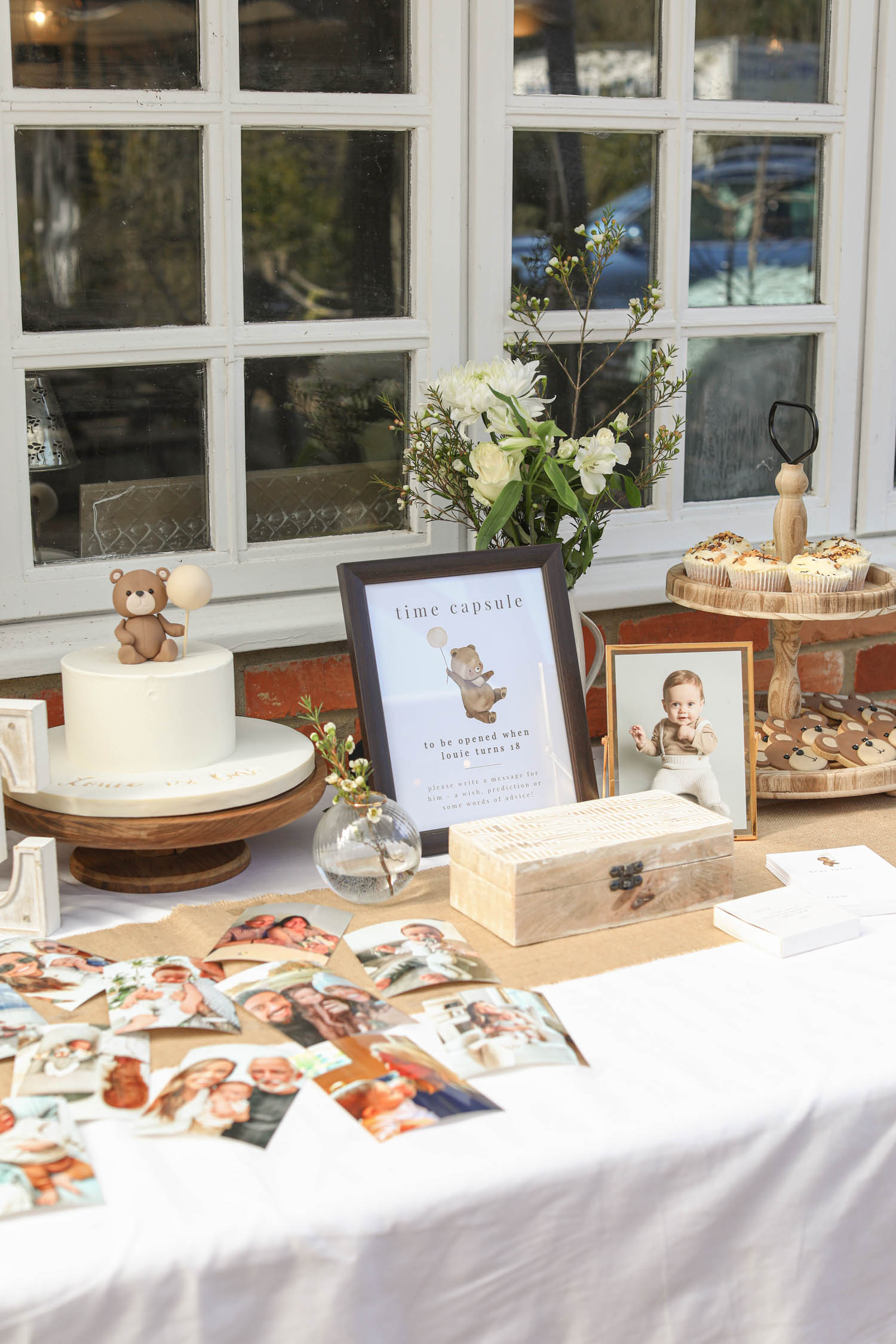 In terms of food, I was really torn. I had ordered a bunch of desserts from Cakes by Robin that went along with our theme so I had that taken care of but I also knew not everyone would want a ton of desserts. With a 1:00pm start, we didn’t want to order a lot of heavier food if some guests may want or need to eat earlier, as many who came do have children. We were conscious of the fact that there could have been a lot of food waste in that situation so Charlie suggested supplying grazing boards to allow people to munch and nibble on something and then, he said if anyone wants anything more then they obviously have the option to order something from the menu. It worked out perfectly that way! With regard to food, I would say … order less than you think. I ordered 12 cake pops and 12 bear cookies [from Cakes by Robin] and I was so worried that wasn’t going to be enough. We had about 45 or adults and about 15 kids – approximately! I was like … surely that’s not enough and maybe we could have used a few more but, I found that fewer people than you’d think go to grab those things so, don’t stress … order less! 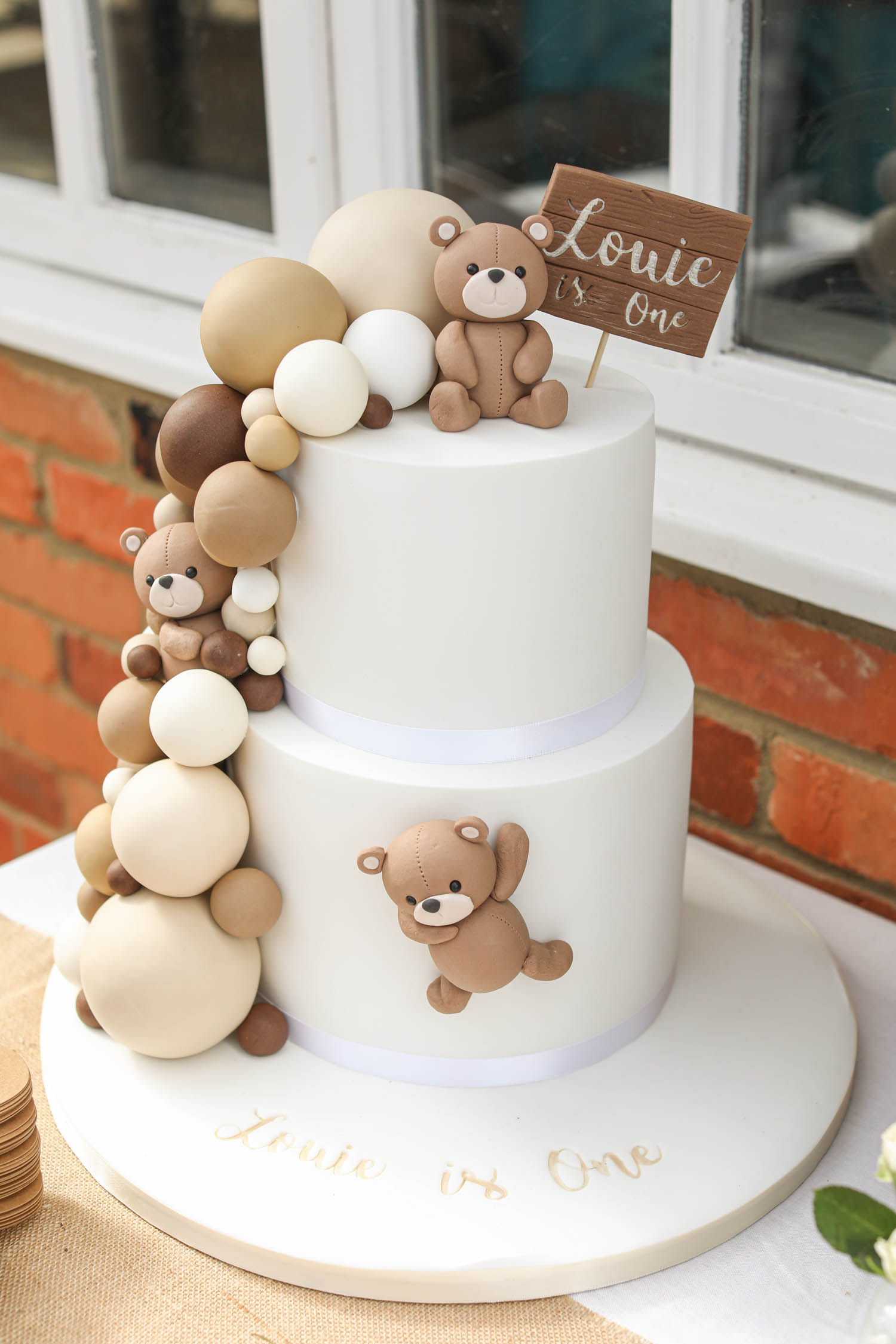 One more thing … if you’re based in London, do not sleep on Cakes by Robin If you need any kind of dessert for a party. She absolutely nailed Louie’s cake! I had sent her so many inspiration photos and she just came up with what she felt was going to suit the theme the best. She absolutely nailed it and her team was a dream to work with. I reached out two weeks before the party and they were able to make it happen. They also kindly offered a delivery service to us which, honestly, surprised me being that we’re a good 40-60 minutes outside of London by car. Of course, I paid for this service, which was a little pricey but I just loved that it was an option. They did an exceptional job so I wanted to underline that for anyone who may be in London, specifically. 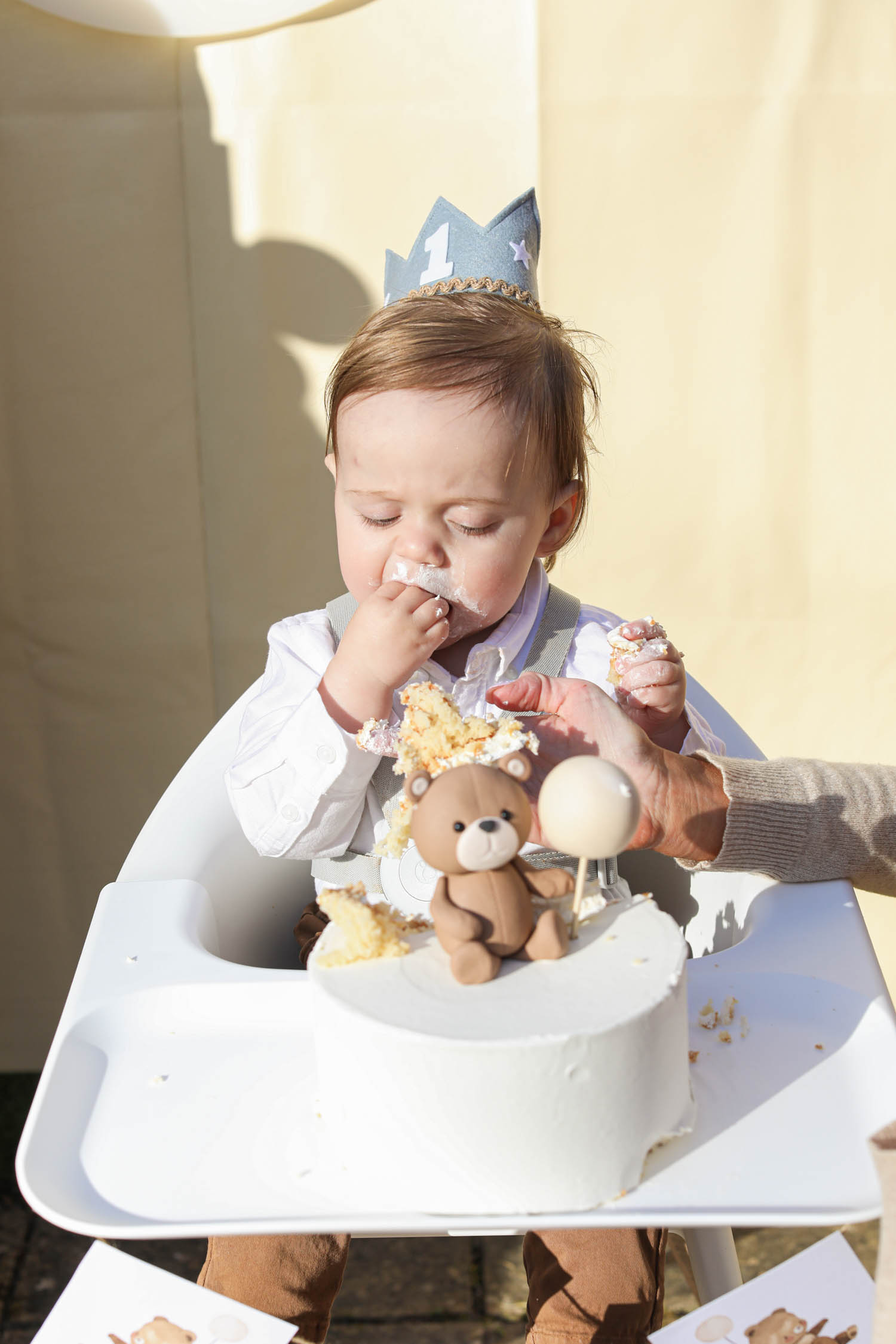 Overall, it was a great day! We really lucked out with the weather – it was the warmest day of the year that we had had at that point and it was sunny all day! We had very few people decline to join us so we enjoyed the company of so many people that we love but don’t get to see enough of! Most of all, little Louie had a great time, discovered how delicious cake is, and got smothered with love from all of the people that we love dearly! 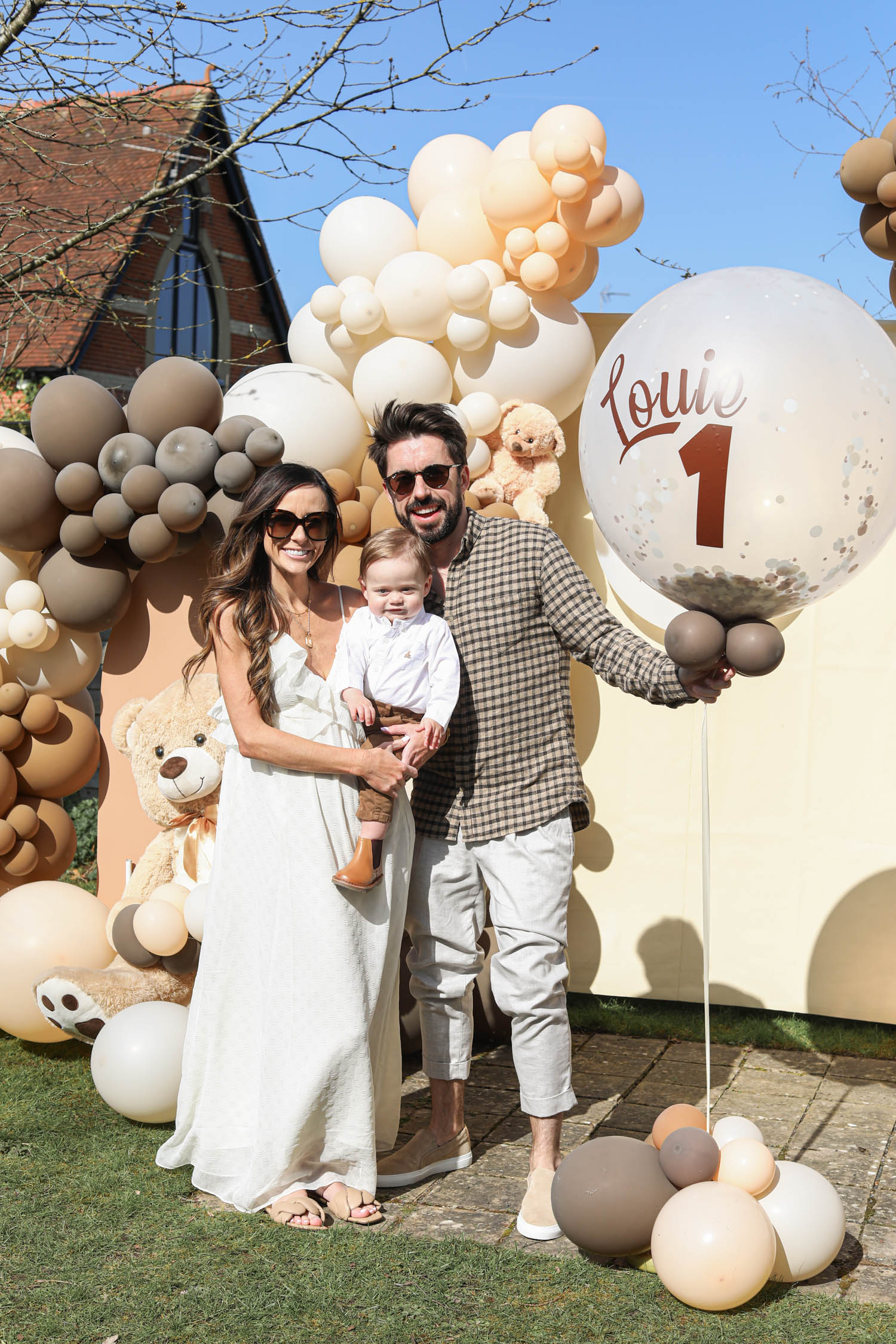 Thank YOU all for sending in so much love to us during his first birthday week/weekend. We really really appreciate you being a part of our community here. You’re the best! xo.