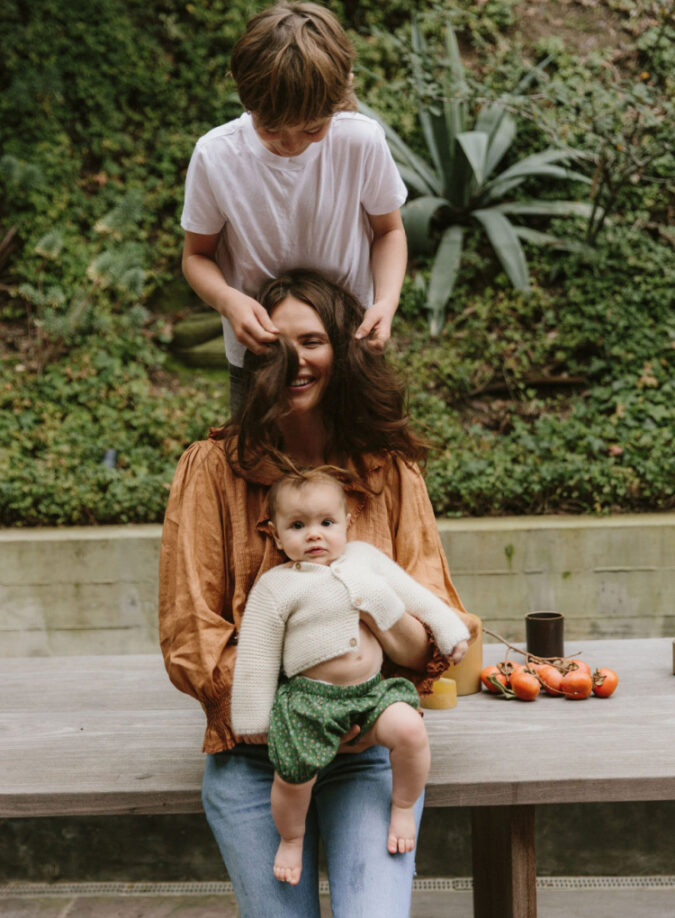 Your Top Mom-Life Tips For Me & First Time Mom’s 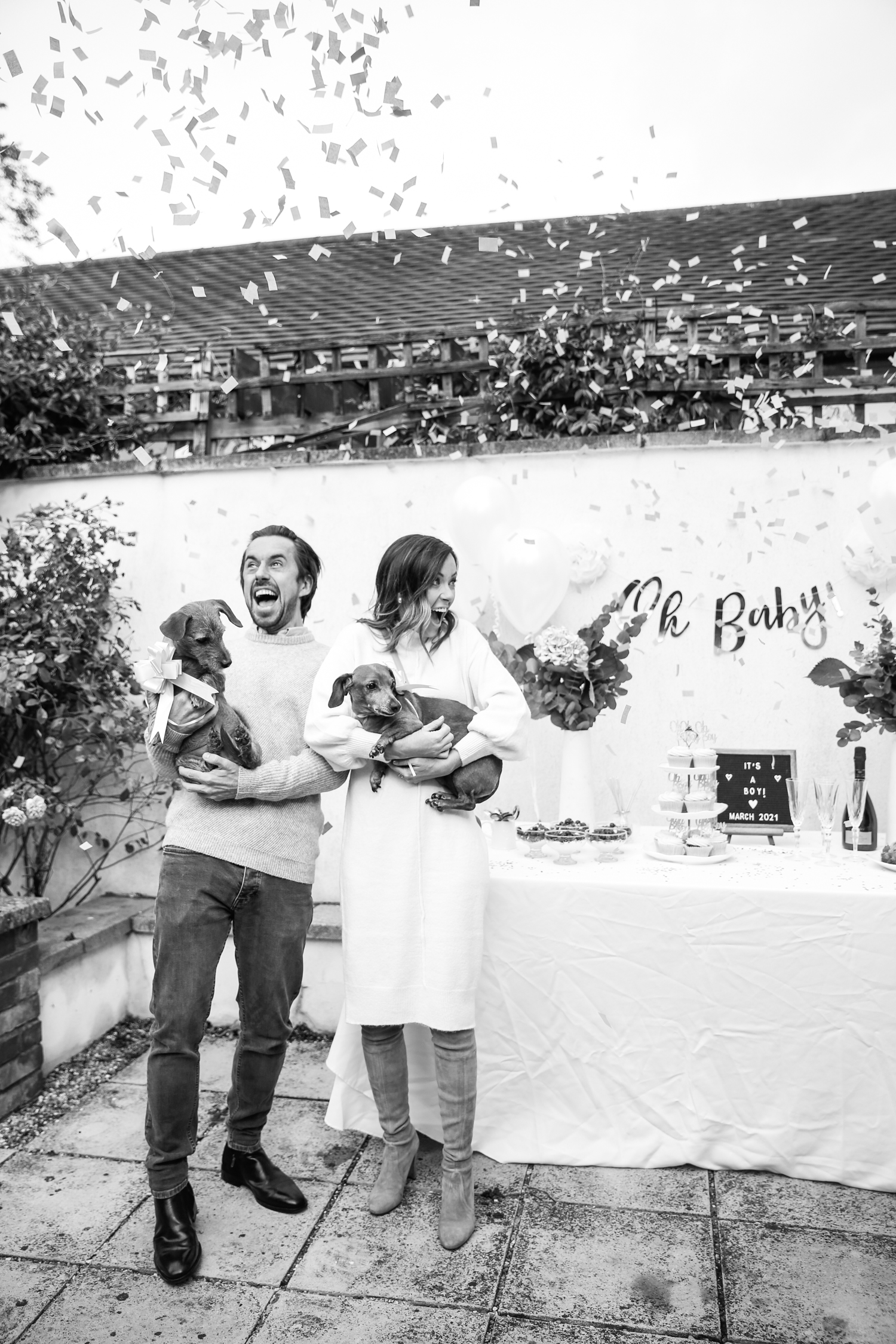 As many of you know, John and I found out what this baby is last week through a fun [and very small] gender reveal that my girlfriends threw for us. John thought it was a boy the whole time. I initially thought it was a girl but did start to think later on that it might be a boy but thought, ah well, I’ll stick to what my initial gut feeling was. All of my boy mom friends were SURE it was a boy and all of my girl mom friends were POSITIVE it was a girl. All of the old wives tales pointed to girl, as described in THIS Instagram photo. So, honestly … it was anyone’s guess! No matter what Baby Martin turned out to be … we knew that the only thing that mattered was their health and we would be happy no matter what! 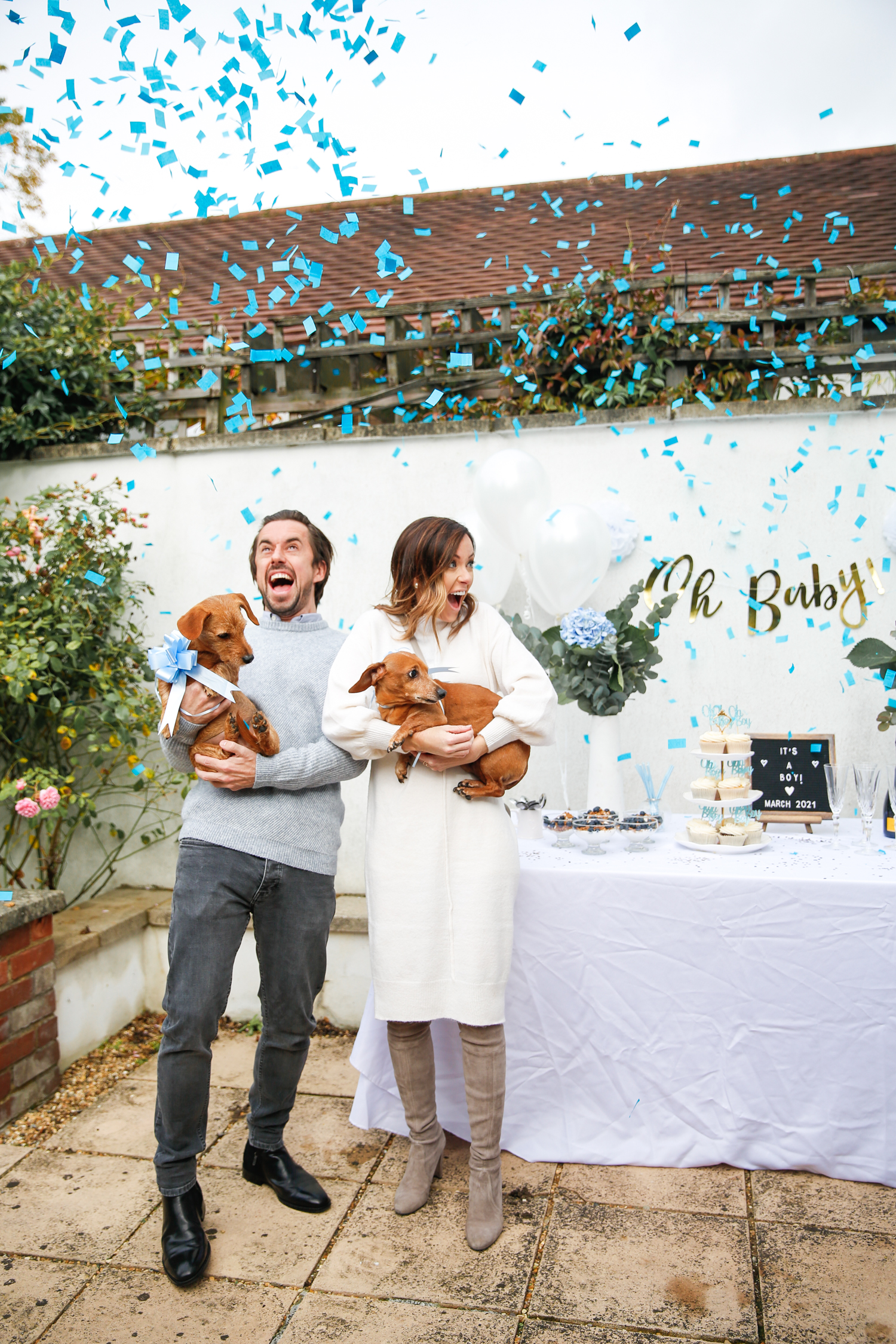 We are beyond thrilled with this news! While I had a suspicion it was a girl, I did start to have thoughts about it being a boy. To be honest, while I’d LOVE a little girl, I can totally see myself as a boy mom. I’m not sure why. It might be because I have two boy dogs [I know, very different] but, regardless, I think it’s going to be SO fun. Moreover, I love that John is getting what his heart has wanted and hoped for! His Dad passed away a couple of years ago and he is the last male in the family to be able to carry on the Martin name unless he has a boy So, it warms my heart that the Martin name will live on through our little nugget. 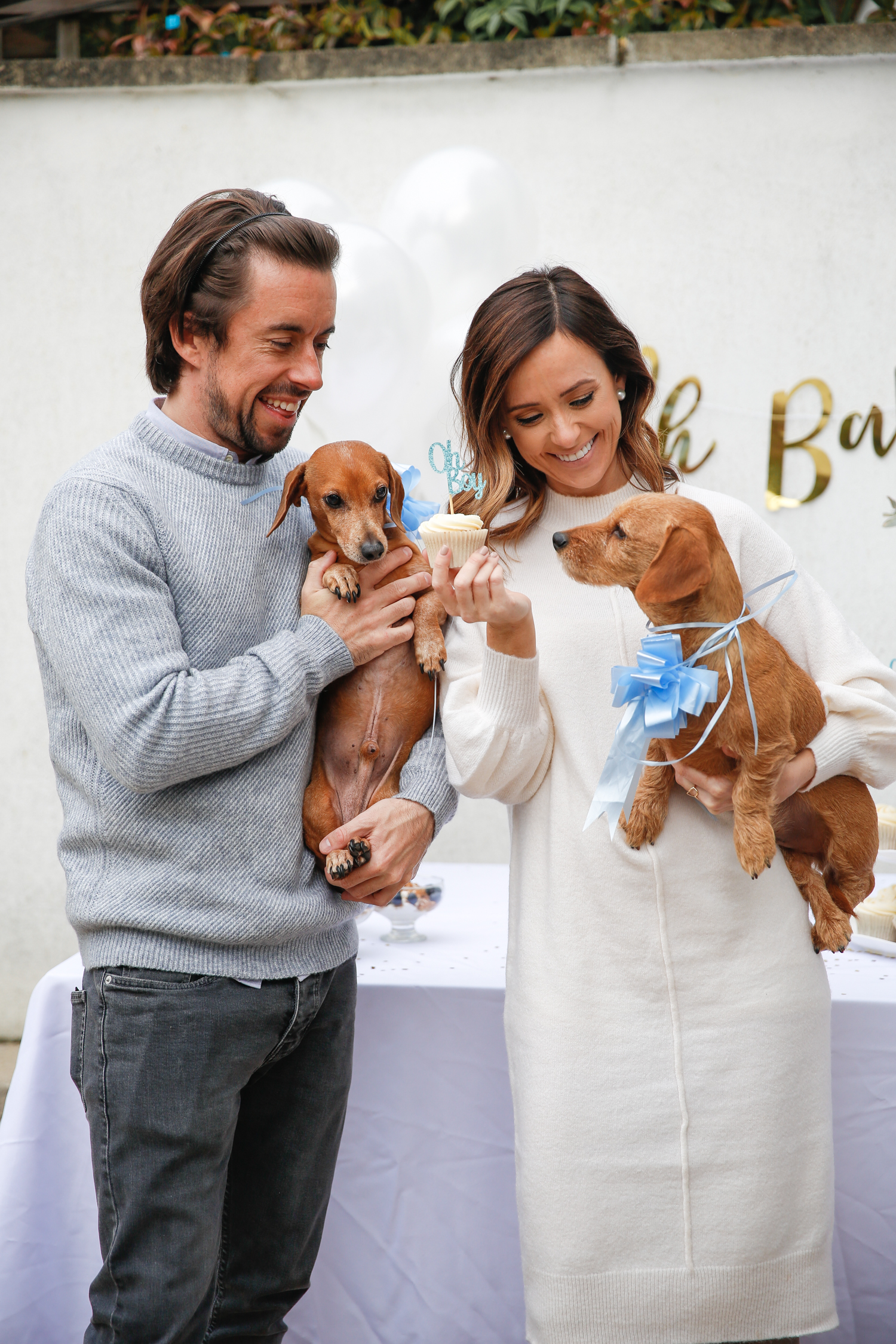 Since today marks 20 weeks, I thought maybe I’d kill two birds with one stone and do a little bump date along with the gender reveal, if that’s alright! This is technically my first one, although maybe you could count my “I’m Pregnant” post since it had so much detail but, anyway! Let’s get started!

Name: So, boys names are hard. Hah! I’ll just say it. We had a girls’ name picked out MONTHS AGO. Like, it was one of the easiest decisions we’ve ever made together. And I’m not going to lie … before finding out, while I genuinely would be happy with either gender, I kind of hoped it was a girl because it’d be one less thing pertaining to pregnancy / baby that we needed to figure out, hah! Maybe you felt the same about one gender over another.

Y’all, we have gone through … hundreds of boy names at this point … and we MAYBE agree on … four? I tend to like more unique names and John likes very classic, traditional names. But, thankfully, after finding out on Saturday, we made a lot of progress. We started going through more names and surprisingly landed on a name we both really, really like. It’s a bit of a mix of our preferences and we got really excited about it for that first day or two. Now, we still like it but I think we’re both open to continuing the conversation and seeing where we land. Please tell me this is normal, hah!

Size: Baby is now the size of a banana and weighs 10 ounces! 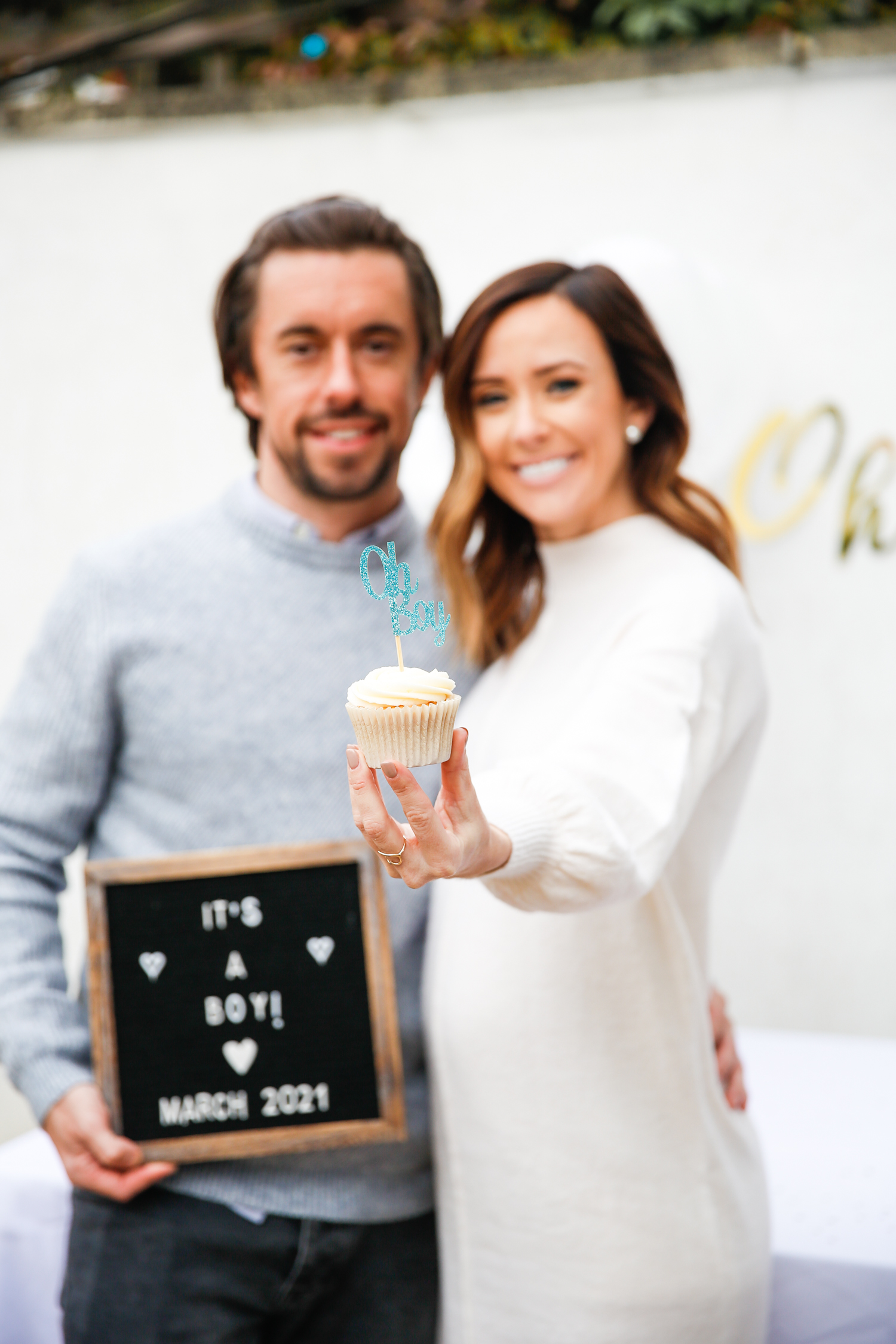 Movement: I actually just started feeling kicks over the weekend while we were in the Cotswolds! Every so often, I’d feel what was like a gas bubble in your stomach, I guess? I don’t know how else to describe it

Most Excited About: In the short term, I’m excited for my 20-week ultrasound this week. It is scheduled for Thursday. I am hoping John can come in with me but, sadly, I don’t think he’ll be able to. :\ It’s such a shame. But I hope everything is developing well and there isn’t anything scary to report. In the long term, I think I am the most excited about seeing what his little personality is going to be like. I know it’ll be awhile before all of that is truly unveiled but that is what excites me most about becoming a mother … seeing the fruition of this time you’ve spent knitting your baby together. I also cannot WAIT to see John melt into a puddle when he is born. I’m so lucky to have him by my side through all of this. He’s going to be such a great Dad! 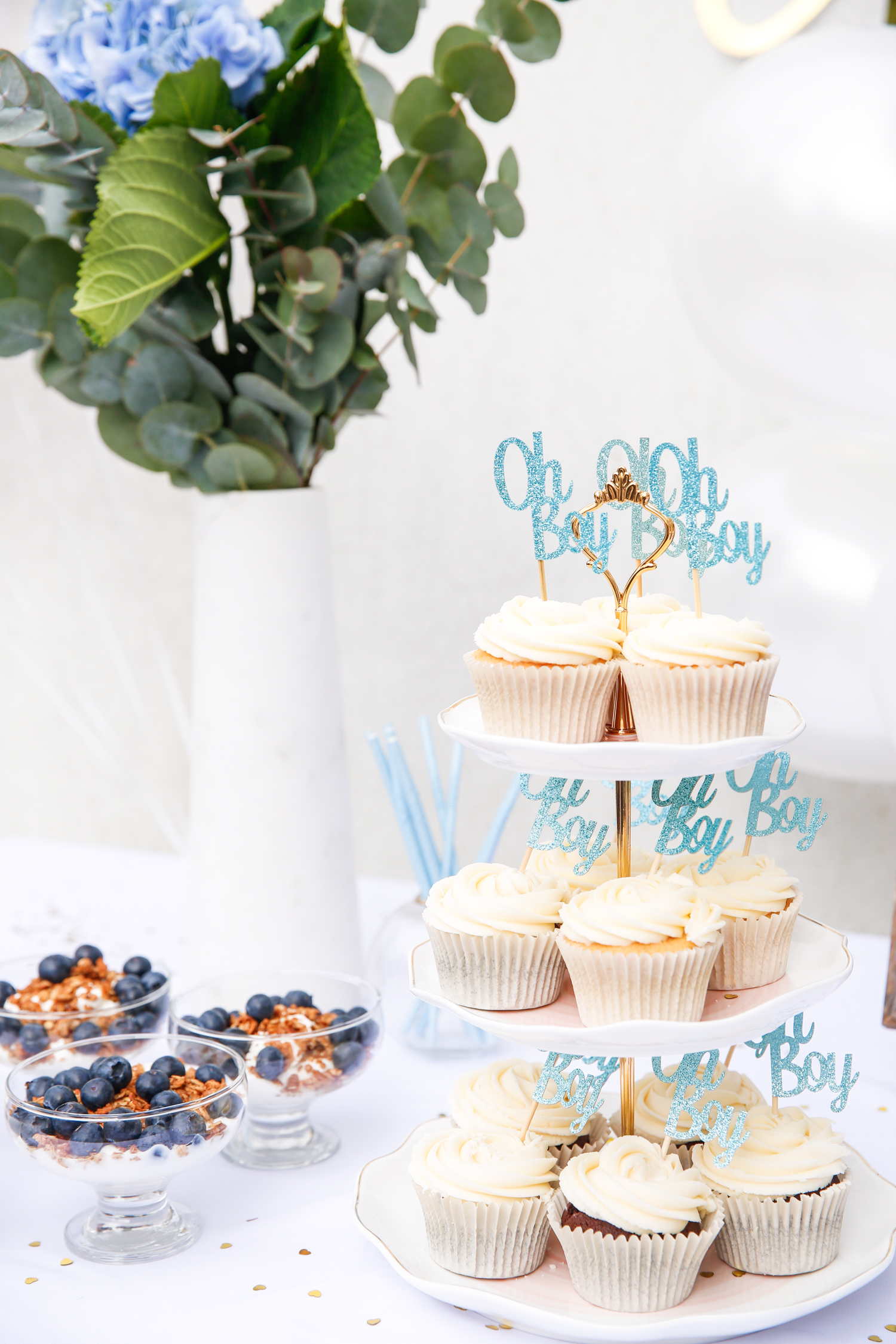 Least Excited About: I will say what has stolen my joy the most is this thought that I am so behind on all the things. Our house is always a disaster and I never seem to make even a shred of progress on any given day with it. I haven’t started a baby registry. I haven’t started researching literally … any baby products. I haven’t signed up for an antenatal or hypnobirthing course. I just feel behind so getting ‘caught up’ will maybe make me feel a little more excited about all that is to come but playing catch up, right now, just feels really draining when life outside of baby also feels like a bit of a mess.

Symptoms: Back pain is very, very real. My left hip has been killing me the last two days – even after trying to sleep with a pillow between my legs. Other than that, I’ll have days where I feel a little more tired and I just chock that up to baby having a growth spurt so I allow myself to take it a little easier on those days.

Aversions: Thankfully, all of the aversions I had in my first trimester are completely gone. I am back to drinking my iced honey latte’s and eating meat whenever John feels like cooking bacon or steak! I’m honestly so glad because those are things I typically love and didn’t like being without, ha! 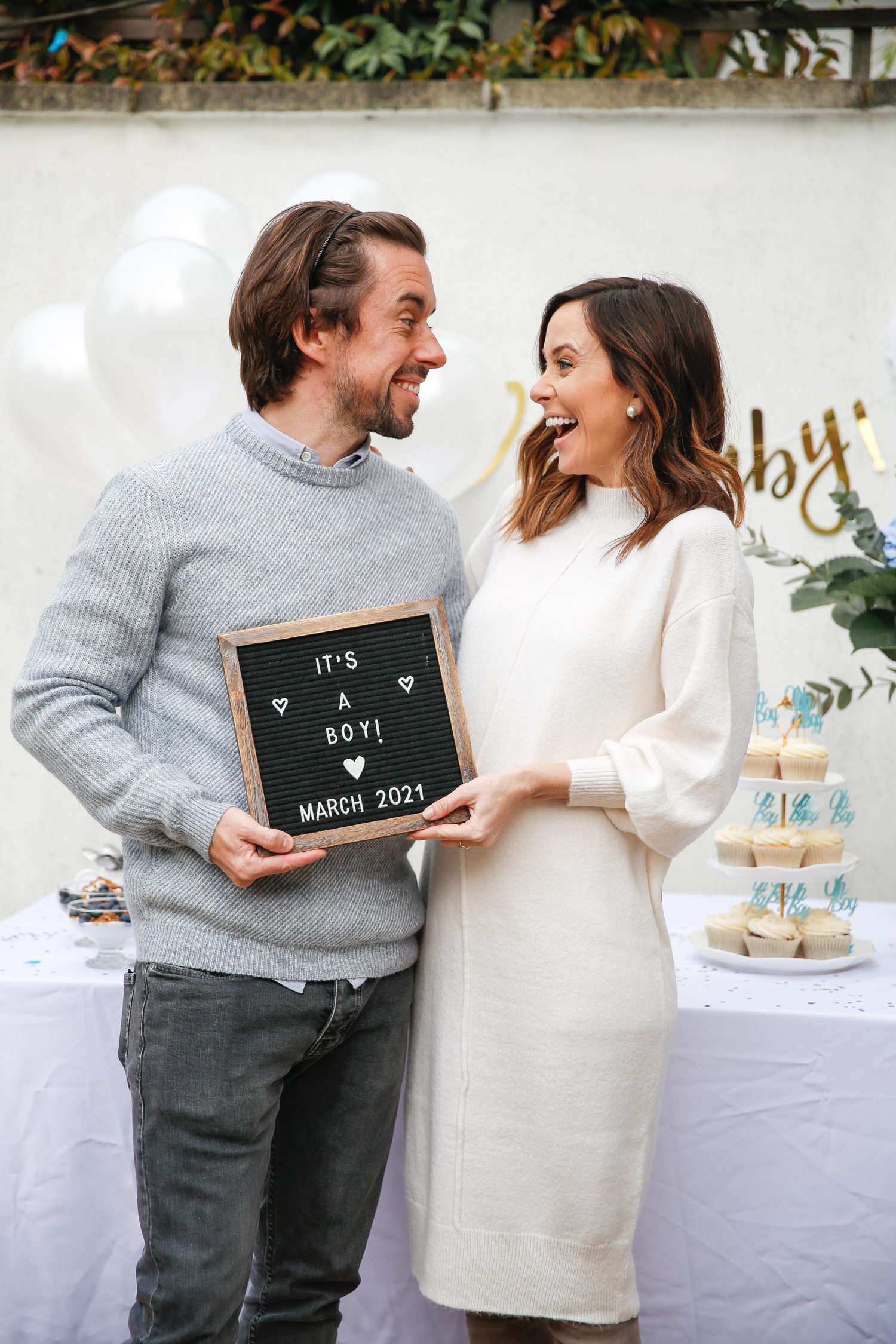 Cravings: I honestly don’t get ANY cravings, at least not anything crazy out of the norm, you know? I’m boring. But, I will say that anytime I eat pineapple or oranges … it’s like I have never tasted anything more delicious in my life. Something about citrus that just tastes better when pregnant!

Weight Gain: I literally had no idea until TODAY, actually. When we got back from the Cotswolds, we found that John’s mom kindly left us a scale that she found as she was packing for an upcoming move [she already had one]. So, I weighed myself this morning and I weigh about 110 pounds. I’m not exactly sure what I was before getting pregnant but I’d say around 95 pounds.

Workout Situation: I probably should be doing more because my workout is walking around London once a week in heeled booties or boots, which honestly … is probably really good cardio! I get a REALLY good nights’s sleep after those outings. 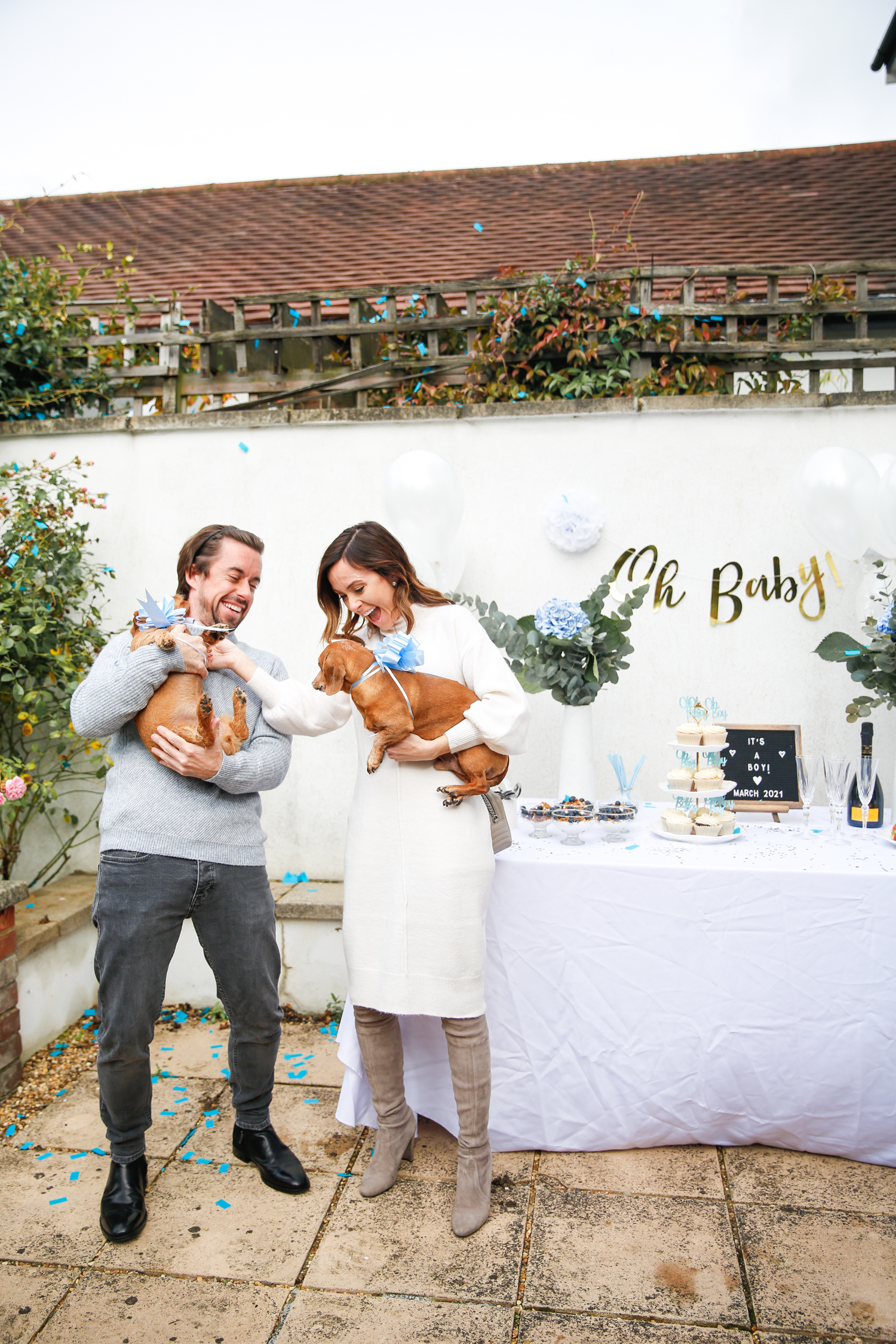 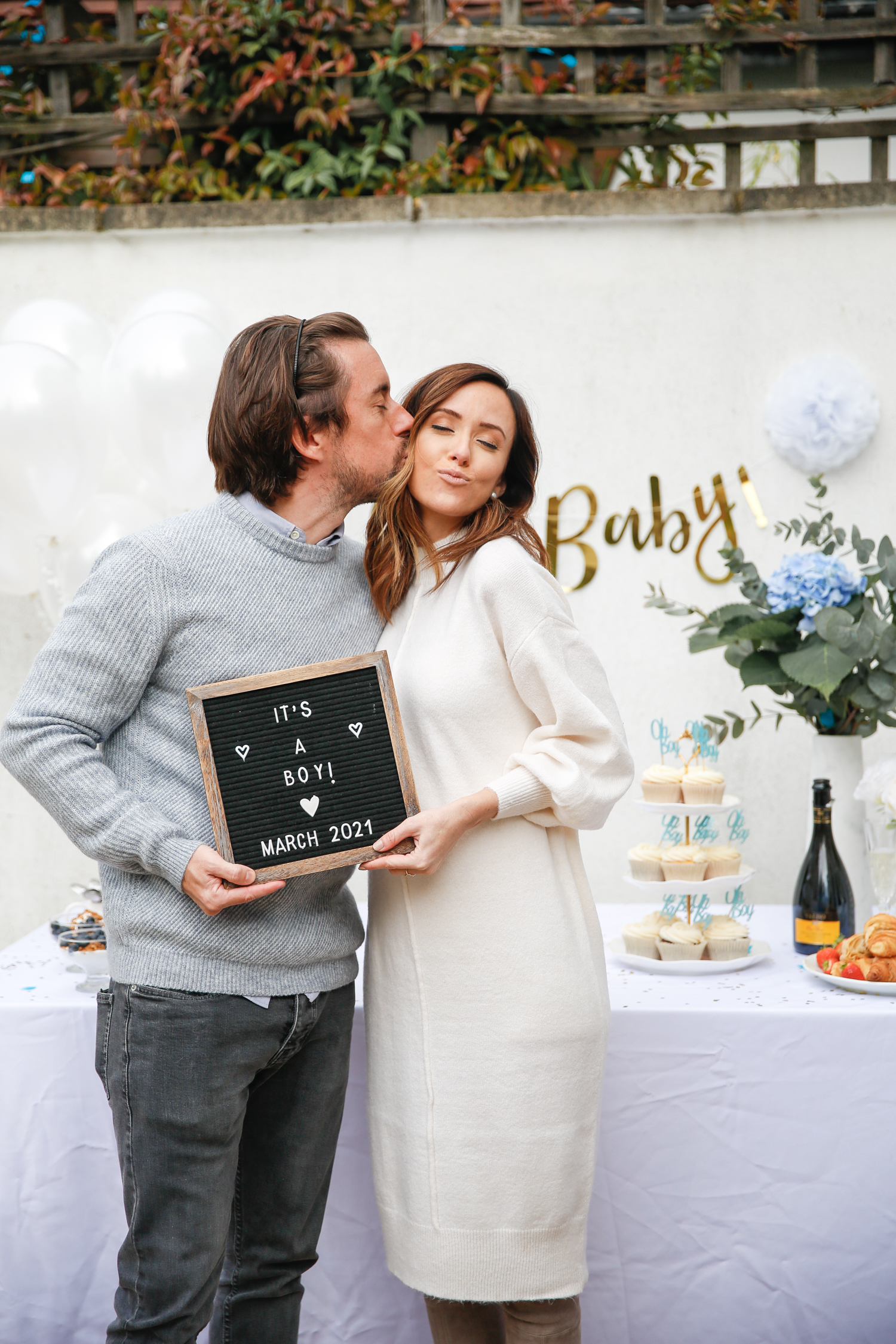 Favorite Maternity Style Pieces: Honestly, you guys … I find styling the bump a struggle. I think I got too late of a start on ordering a Bellaband and maternity jeans & leggings. I definitely underestimated the need for those things. I am loving this pair of black jeans from ASOS and I am so hopeful with the order I placed during the Shopbop sale. I snagged a couple of pairs of denim as well as leggings with fleece lining being that it’s already cold here and only going to get colder as my pregnancy progresses. I’ll likely be living in these leggings so I bought quite a few. Thankfully I got them all on sale but this is what I ordered.

I’ve also been living in oversized sweaters and sweater dresses. Be sure to follow me on Instagram and in the LIKEtoKNOW.it app for all outfit details and to stay up to date with my maternity purchases.

Nursery Update: In case you missed it, we won’t be putting together a dedicated nursery for baby boy until next year. We are currently in a 2-bedroom, which we thought would be perfect for us as a couple, and agreed to use the second bedroom as a split workspace for us both. We have definitely learned a lot about what we both need now that we are both fully working from home [well, mostly John … I’ve always worked from home]. We will obviously need a few things for baby right away but will definitely need to move into a bigger space next year that has at least three bedrooms. That’ll be next Summer when he is about four or five months old — not really looking forward to moving then but, it’s just what we have to do and we’ll make it work! The good thing is, though, he won’t need much during those first few months so I’ll be shopping for the absolute bare minimum when it comes to baby. I’ll be looking for a bassinet to keep at our bedside along with a little three-tiered trolley that I can wheel around as I need to for pumping and changing him. I’ll be getting a chest of drawers that hits at about waist level so I can change him on a change pad on the top of it [I know I can change him anywhere, and likely will, but I like having dedicated places for things; it brings me joy, ha!], a stroller and a Dockatot. If you have any other suggestions, leave them below in the comments so I can easily refer back to them!

Babymoon Plans: I shared a little bit about our thoughts on the baby moon in this month’s Friday Five post. We talked a little more about it over the weekend and, with Wales and Ireland on a full lockdown again, we just don’t think we’ll be able to go anywhere other than somewhere here in England. And, that is also up in the air. We might be in a full lockdown in a few weeks’ time so we are hopeful but also trying to be realistic. If we go away anywhere, we’ll take the boys and stay in the countryside somewhere – either in the Cotswolds or somewhere around Bath.

What I’ve Purchased So Far: Honestly, I haven’t purchased ANYTHING! I feel so behind, hah! The only thing I have is a breast pump by Elvie and I could not be more excited about it. I know that’s weird but I had heard so many amazing things about Elvie from my mom friends. They all said it was the ONE to go for so I about fell over when they kindly offered to send me one. I’ve also had my eye on some cute clothes on H&M’s website! They have so many cute options! I really need to get started on stroller research so if you have any that were mind-blowing, leave those suggestions below, as well!

Okay, guys! I think that does it for today!! Please let me know what else you’d like included in bumpdates! I’ll be doing them every four weeks until HE is here!!! 🙂 Have a great rest of your week! xo.